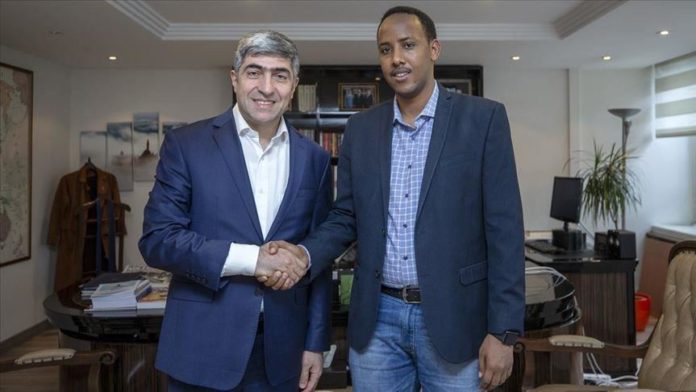 Abdinur Mohamed, communication director of the Somali president’s office, was welcomed by Anadolu Agency’s Deputy Director General and Editor-in-Chief Metin Mutanoglu who briefed him about relations between the two countries.

Mohamed expressed his support and concern over Israeli airstrikes on Anadolu Agency’s Office in the Gaza Strip.

”We consider Turkey a second home. Turkey is very close to our minds,” Mohamed said at the meeting.

”Thanks for welcoming us,” he added.

”In less than nine years Turkish model of aid has attracted many Somalians,” Mohamed added.

Turkey is helping Somalia in the construction of roads, schools and hospitals.

”We want to strengthen the relationship, it should go further. In 2011, Turkish aid agencies came to help us from famine. By 2019 many Turkish companies operate in Somalia,” he said.

Mutanoglu said that Turkish assistance is different from the West.

”We don’t think like the western countries when we go to Somalia. We go there to help. We believe that Somalia deserves every good thing which developed countries have,” Mutanoglu said.

Mohammed reiterated the need for news agencies of both countries to cooperate and invited Anadolu Agency to open an office in Somalia.