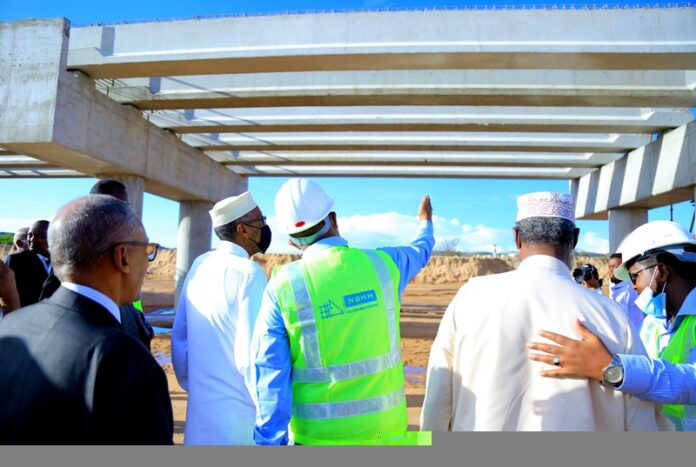 President of Somaliland Musa Bihi Abdi on Thursday inspected the work progress of a new bridge which is under construction on the highway between Hargeisa and Berbera. Floods in Da’ar Budhuq dry riverbed cause casualties during the ainy season. President Bihi together with ministerial delegation have toured the construction site which is smoothly progressing well. SL Head of State met at site the construction workers. The president was briefed by workers in the site on the development and the completion of the bridge building. Officials at the bridge construction site has assured President Bihi that it will be completed as the project is part of Berbera corridor highway. Foreign engineers who are also part of the team of Berbera Corridor highway said that other bridges in the road between Hargeisa and Berbera will also be accomplished. President Bihi has thanked the construction workers at the site of the bridge. He also said that it is a huge achievement for the realization of Berbera Corridor Highway as its is crucial for the movement of traffic. He said: ” It is a great pleasure to see that the major bridges that are part of Hargeisa-Berbera highway will be completed at the end of 2021. Kulmiye party promised to rebuild roads. Da’ar Budhuq bridge is 105 M long, according to statement from SL Presidency.