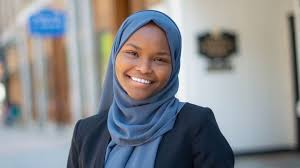 With just a week to go before the election, Safiya Khalid was in tears. She had spent the past six months knocking on hundreds of doors in Lewiston, Maine, the city where she arrived as a refugee more than a decade earlier, and where she hoped to be the first Somali-American to win a seat on the city council. Suddenly, online trolls from as far away as Alabama and Mississippi were hurling vile abuse at her, telling her that Muslims had no place in American government and she should go back to where she came from.

“I just couldn’t take it,” Khalid told The Washington Post on Tuesday night. “I was crying so bad, my eyes were completely red.”

Khalid, a Democrat, was unsettled by the fact that someone had posted her address on social media. But she was also worried that the hate-fueled attacks would become a distraction. So she deleted her Facebook account, asked friends to look out for worrisome comments, and went back to pounding the streets with her leaflets and her clipboard.

On Tuesday night, she won her race by a significant margin. The victory, she told supporters, showed that “community organizers beat Internet trolls.”

At 23, Khalid may be the youngest person to ever serve on the Lewiston City Council, as well as the first Somali immigrant. Her win on Tuesday night was one of several historic firsts across the country in local elections. In Virginia, Muslim women were elected to the state senate and the Fairfax County School Board for the first time. 23-year-old Nadia Mohamad became the first Muslim woman and first Somali elected to the city council in St. Louis Park, Minn., while Chol Majok, a 34-year-old who fled violence in South Sudan, became the first refugee elected to public office in Syracuse, N.Y.

But as Khalid’s experience demonstrates, running for office can be complicated when you’re a minority several times over. Though only about 36,000 people live in Lewiston, her campaign drew unwanted national attention as a photo from her high school days was shared thousands of times, and white nationalist blogs invoked fearmongering claims about the first two Muslim women in Congress, Rep. Ilhan Omar (D-Minn.) and Rep. Rashida Tlaib (D-Mich.). Every aspect of Khalid’s identity was weaponized, she told The Post, and she was attacked for being black, Muslim, a woman, and a refugee. At times, she admits, “I honestly thought, ‘What did I get myself into?’”

Khalid is used to facing challenges. She fled war-torn Somalia with her mother and two younger brothers at the age of 7, arriving in an unfamiliar land where they didn’t speak the language and knew no one. In an interview with the Bangor Daily News, Khalid recalled that a social worker who helped her family to resettle in New Jersey filled their refrigerator with pork products, not realizing that the food was off-limits for Muslims.

Before long, Khalid’s mother decided to move the family to Maine. Somali refugees had started migrating to Lewiston, a former mill town, in the early 2000s, drawn by the abundance of cheap housing, good schools, and low crime rate. Today, Khalid says, roughly a third of the city’s population is Somali.

Khalid embraced her new home, working for the area’s best-known employer, L.L. Bean, as she made her way through Lewiston High and the University of Southern Maine. While still in college, she unsuccessfully ran for a seat on the school board. Her desire to hold public office, she told The Post on Tuesday, came from watching city leadership remain stubbornly white as the city grew increasingly diverse.

So when a seat on the Lewiston City Council opened up earlier this year, Khalid didn’t have to think hard about entering the race. She was tired of hearing anti-immigrant rhetoric from President Trump and former Maine governor Paul LePage, a Lewiston native who once claimed that asylum seekers brought diseases and were the biggest problem facing the state.

“Minority people were being attacked and felt invisible, because they did not feel represented in positions of power,” she said.

After finishing up at her day job as a youth mentor at a nonprofit that helps immigrants, Khalid would hit the streets for hours of door-knocking before it grew dark. Her campaign focused on pragmatic issues like building more affordable housing and addressing lead contamination, though she frequently spoke of the need for a “fresh perspective” in city government. Some saw that as an attack on older, wealthier white people, she said on Tuesday, but that wasn’t how she meant it.

“Any local government needs to be reflective of the community,” she said.

It was only in the campaign’s final stretch that things turned ugly. During the last week of October, videos appeared on YouTube, showing what Khalid’s opponent claimed was an attempt at intimidation and harassment. They had been filmed in August, shortly after Walter “Ed” Hill decided to join the race, and appeared to show people ringing his doorbell and knocking on his door, then calling him “cowardly” and “pathetic” when he didn’t answer.

Hill, also a Democrat, told local news outlets that the culprits were members of the Lewiston Democratic Committee, who were angered by his decision to run against Khalid and showed up to demand an explanation. Because he was recovering from surgery and on painkillers, he had been unable to get up and answer the door, he said, telling the Bangor Daily News that he felt “scared and pretty vulnerable.”

Khalid’s campaign has repeatedly condemned the incident and said that they had nothing to do with it. But, as Mainer reported, the story soon spread to local right-wing Facebook groups. Commenters began mocking Khalid’s hijab and suggesting that people in Lewiston should send her back to Somalia because “we are slowly losing our city.”

Before long, trolls with no apparent connection to Maine were falsely claiming that Khalid wanted to institute sharia law in Lewiston and spamming her campaign’s Facebook page with racist comments and outright threats. Many, the Sun Journal wrote, were “too graphic and inappropriate to be published.”

Campaign volunteers went into overdrive trying to delete and report the worst of the attacks, but the harassment didn’t stop. Trolls got hold of a photo taken when Khalid was a 15-year-old high school student, which showed her making a goofy face and giving the finger to the camera, and plastered it across social media.

“This is a pic of a young lady whom is running for a position in a governmental role for the town of Lewiston, Maine,” said one tweet that was shared nearly 4,000 times in the lead-up to the election. “Make her go viral.”

Even though she knew it would make campaigning harder, Khalid temporarily deleted her personal Facebook account “for my own sanity,” she told The Post. It was crunchtime for the election, so she didn’t report the threatening messages and harassment to the police, even though she started to get nervous when someone from a neighboring town posted her address on Facebook.

“I probably should have taken that step,” she said on Tuesday, “but with the election in a few days, I felt like all my energy needed to be at the door with voters.”

When results came in on Tuesday, Khalid learned that she had defeated Hill with nearly 70 percent of the vote. The decisive win showed that Lewiston residents didn’t see eye-to-eye with the online trolls and had a different vision of the city’s future, her campaign manager, Jacob Nishimura, told The Post.

Watching a high school photo used to argue that she was unfit for office cemented Khalid’s belief that young women who enter politics are subject to extra scrutiny. But knocking on more than 1,000 doors and giving up her nights and weekends to the campaign taught her another lesson.

Over and over again, she said, people told her that they would be voting for her because she had gone to the trouble of showing up. The race was won door by door, she said, “not on the Internet.”