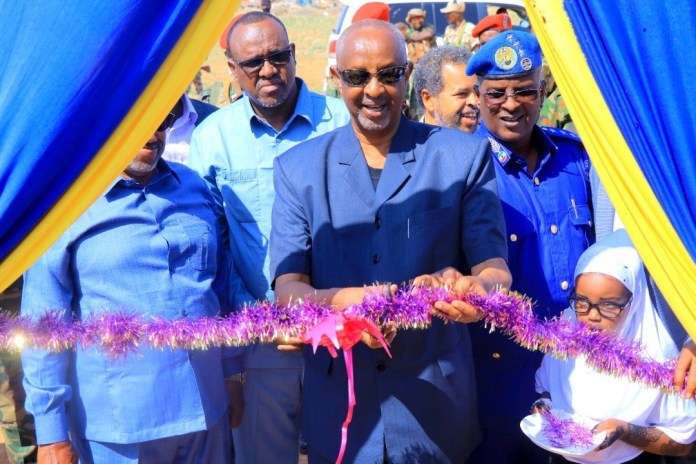 Minister of Interior Hon. Mohamed Kahin Ahmed has opened a new headquarters of the Police Rapid Force in Las Anod.

The fort, whose construction started three months ago and financed by the government, is set to play a key role in strengthening security stability in Las Anod and the rest of the Sool region.

The Mayor of Las Anod Abdirahman Ali and the Governor of Sool Abdiqani Mohamud who spoke at the event appraised the building and underlined that it will strengthen security in the Sool region.

Speaking at the event, Brigadier General Mohamed Adan Saqadi, Commander of the Somaliland Police Force, thanked owner of the plot who donated it to be used for the building, terming the gesture a value added to the security and development of the city and region.

Interior Minister Hon. Mohamed Kahin thanked the President and stated that similar buildings were intended for Police Rapid Force to be erected in all regions.

“I thank the president for his acceptance and fund when me along the Police Chief presented its plan.”

Hon. Mohamed noted security and development being the government’s utmost priorities in the country.