Life has returned to normalcy in Mogadishu, the capital of Somalia, after skirmishes broke out during opposition march on Friday, leaving a number of civilians dead. Soldiers loyal to Somali president Mohmed Abdilahi Farmajo fired on demonstrators including ex-Somali PM, Hassan Ali Khaire and other opposition figures, sparking confrontations with opposition security guards.The exact number of casualties has not been disclosed, but according to a statement released by the US embassy in Mogadishu said that as many as 20 people were killed or wounded in the gunfire exchange. Security forces blocked major roads across Mogadishu before protesters took to the streets and dispersed the opposition supporters marching along the airport highway, using live bullets. A mortar bomb hit Adan Adde airport during the clashes, damaging a restaurant inside its fence. All incoming and outbound flights have been canceled on a temporary basis. Opposition groups have claimed that the mortar shell was intended to target them. The government of Somalia remains tight lipped over the opposition assertions. Opposition groups have accused the security forces launching the attack in a bid to assassinate them and labelled the outgoing leader as a murderer and war criminal who instigated the raid. Hassan Sheikh Mohmud who stayed a hotel raided by Special Somali Forces on Thursday night said that a coup had been staged by president Mohmed Abdilahi Farmajo. Hassan Sheikh Mohamud tweeted by saying that what transpired in Mogadishu last night and today is orchestrated by ex-president who refused calls to lead the country to elections. “The Federal Parliament and militia commanders who have backed him in the coup will be held accountable for their actions and brought before justice.” UN Mission in Somalia expressed deep concern about Friday clashes in Mogadishu and called and called for calm and restraint by both sides involved. Puntland state said that the action was despicable and urged both sides to end the deadlock through talks. US embassy cautioned its citizens should avoid downtown Mogadishu after clashes erupted which is blamed for the lack of holding polls. African Union Chairperson, Musa Faki, expressed deep concern over the deteriorating security and political scenario in Somalia. Somalia’s PM Roble urged the public that they should spoil the hard earned peace. He pledged that elections will be held. Talks between the Federal Government of Somalia and leaders of Federal Members states were expected to open in Mogadishu but was delayed after the chaotic incidents that hit the capital. 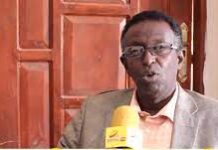