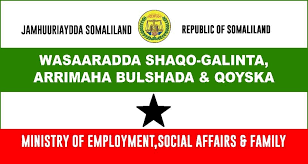 Somaliland Government starts actions to limit the number of foreign workers in the country and ways to train local labor to get the necessary skills needed in some jobs.

The Director-General of Ministry of Labor and Social Work Abdirashed Ibrahim who spoke to CBA TV said the government is taking steps to control the number of foreign workers in Somaliland by introducing tougher criteria to get Workers’ Visa before coming to Somaliland. He added that only workers with skills that are not available in the country will be allowed to come to Somaliland.

The Director-General summarized the reasons behind the foreign workers in Somaliland by saying that foreign workers came to Somaliland in large numbers when government departments were not strong enough to control these foreigners.  He also added that Somaliland citizens lack the required skills for some jobs in the country and which attracted high-skilled workers.

Abdirashid said the government in collaboration with Non-governmental organizations have begun projects to establish vocational training centers and train youth to much-needed skills to lower the high unemployment in the country.

According to Somaliland’s National Development Programme, unemployment among youth stands at 75 percent, which is much higher than the nation’s average of 61.5 percent in urban areas and 40.7 percent in rural and nomadic areas. Unofficial estimates show that at least 65-70 percent of Somaliland’s 3.5 million people are under the age of 30.