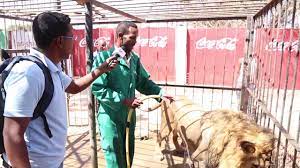 Lions from Warran Adde zoo will soon be shifted to Damis zoo which is administered by Somaliland government. The decision to translocate the lions from residential area to lion sanctuary comes after a lion escaped from the zoo, and having seriously injured a woman. The environment minister, Ms. Shukri Bonadre, has confirmed that the government has decided to relocate the lions due to public safety which is a high priority for the government. Damis zoo is administered by Somaliland government and is top priority for the conservation of wildlife which is on the brink of extinction from over poaching and illegal smuggling trade of its wild animals. However, it was not yet clear as to when the government start the relocation of the lions into Damis zoo. Former SL interior minister, Ali Waran Adde who is the owner of the private lions zoo, repeatedly said that he is ready to transfer the lions to government controlled zoo for the public safety as being a top priority.