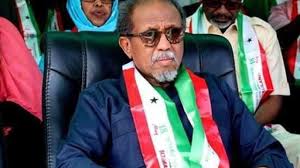 Professor Ali Khalif Galeyr, has flown to Mogadishu and is due to make shortstop over at Addis Ababa today. As leader of Khatumo, the professor who has been in Somaliland for the past years said that he is leaving for Mogdishu, the Somalian capital on personal visit. speaking to local press, Mr. Galeyr has said that he is about to embark on tour to Somalia in order to do urgent business matters for him. He stated that Khatumo committee who entered into an agreement with Somaliland are also in overseas and sees the chance to wrap up his personal business in Mogadishu at this time around. He insisted on making his political stance clear from the outset. The professor who is from Somaliland by birth has expressed his optimism that the Khatumo-Somaliland deal will be implemented as soon as possible. He also retaliated that both sides have injected a lot of energies into the agreement to bear fruit. Mr. Galeyr has further revealed that the incumbent president was the chair of the ruling party once Khatumo and Somaliland government entered into the power sharing agreement. The agreement signed during Silanyo’s regime stipulated the amendment of country’s constitution so that locals from remote regions in the state will have a fair share in the government representation.