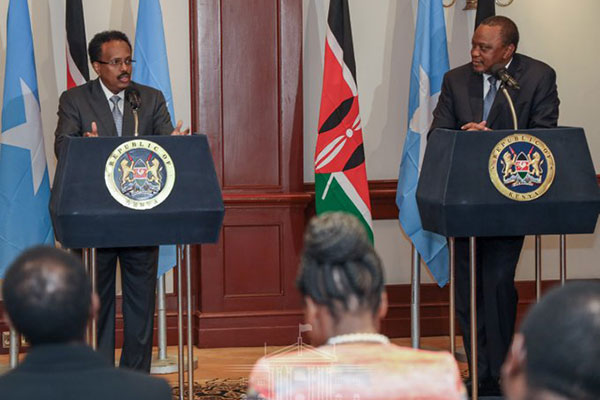 Somalia’s diplomatic relations with Kenya will in 2020 be tested depending on the outcome of the maritime boundary case which is due to be determined in June.

As Mogadishu and Nairobi appeared to iron out relations as 2019 was coming to an end, legal experts said the case at the International Court of Justice was a sticking point and could make or break this rapprochement in 2020.

Dr Ben Sihanya, a constitutional law lecturer at the University of Nairobi, said that a political solution would have been the best for both countries, as a decision by the court may not accommodate necessary compromises.

“The best solution would be a negotiated settlement because the court does not look at compromise and does not give “Solomonic” decisions that leave everyone happy,” he told The EastAfrican this week.

He said the problem is compounded by the fact that certain external actors like Gulf and Western countries have taken sides in the case ostensibly to protect their interests.

“The stakes are very high not only for Kenya and Somalia but those interests in the vast areas that have enormous riches in terms of gas, oil and minerals,” said Dr Sihanya.

Dr Abdiwahab Sheikh Abdisamad, the head of Southlink Consultants in Nairobi and an expert on the Horn of Africa politics, said the ICJ ruling will not end of the dispute, but could likely lead to further deterioration of relations.

“Rather than there being a winner and a loser from the process, Kenya and Somalia could end up as losers, because the former sees the dispute as an existential threat that is about more than potential oil and gas deposits but also, regarding its access to the Indian Ocean,” he said.

Dr Abdisamad observed that while Kenya has tried to convince Somalia to settle the matter out of court, Somalia has resisted.

“Somalia believes its best interests lie in the international legal system, encouraged by nationalist sentiment in the country and the diaspora and other international players with vested interests in maritime resources,” he said.

Dr Abdisamad said ICJ rulings have been ignored in the past and there is no guarantee both parties will accept it.

The maritime boundary dispute has morphed into a political issue is now treated as a matter of national territorial integrity by both countries.

In August, Kenyan parliamentarians called on President Uhuru Kenyatta to consider dispatching troops to the disputed area to protect the “sovereignty and territorial integrity of the republic.”

Somalia lawmakers too suggested that they would be prepared to respond in kind, mostly by passing a motion directing Kenya to pull its troops out of Somalia.

While Somalia’s threat would have involved diplomatic bureaucracy because Kenyan forces are under the UN-mandated Amisom forces which has a separate Concept of Operations, it signalled possible mutual mudslinging.

Kenya has a significant ethnic Somali population and, since the collapse of Somalia in 1991, has also hosted hundreds of thousands of refugees from there.

Observers argue that the two countries need each other more than they need the contested maritime territory, suggesting that whichever way the ICJ rules, the two parties will still need to sit and talk.

“If Kenya were to pull back its 4,000 troops from Somalia, Amisom’s capabilities would be severely weakened,” Dr Abdisamad said, referring to the UN-mandated AU forces in Somalia to which the Kenya Defence Forces are a part.

Al-Shabaab has already been using the dispute with Kenya as a recruitment tool. In September, its leader Ahmed Diriye issued an audio message condemning Kenya’s maritime claims and other forms of foreign ‘invasion’.

There is a suggestion that Kenya and Somalia are better off entering into a partnership in the exploitation of natural resources in the disputed maritime border.

Timothy Walker, a maritime specialist says that Kenya and Somalia should borrow from the example of Nigeria and Sao Tome and Principe that established Joint Development Zones (JDZ) in 2003 after it became clear that the two countries could not agree on the maritime borders.

JDZs are normally established when the parties find it difficult to agree on a single boundary between them or because the resources straddled across the maritime border cannot be effectively exploited and equitably by the individual states acting alone.

At the start of 2019, Kenya was alarmed following reports that Somalia ‘’auctioned’’ oil blocks in the contested maritime area. Nairobi responded by summoning its envoy to Mogadishu and suspended visa agreements with Somalia.

And while Somalia denied the allegations, the tiff punctuated the relations for most of 2019.

But in mid-November, a meeting between presidents Kenyatta and Mohamed Abdullahi Mohamed Farmaajo in Nairobi agreed to normalise bilateral relations. They agreed to start with restoration of the issuance of travel visas on arrival for citizens of the two nations, as well as restoring direct flights from Mogadishu to Nairobi.

But they also agreed that the ICJ judges should handle the case, at least going by public statements from the two leaders’ handlers. Experts say the relations, however, depend on the outcome of the case.

Somalia took the maritime boundary dispute to the ICJ in 2014, after arguing bilateral efforts had failed. Mogadishu wants a boundary redetermined in an area about 100,00 sq. km.

Postponed twice, the oral hearing and determination is now scheduled for June 2020.

The case had largely been in a lull until President Farmaajo took power in 2017. Now, analysts say it could either improve or worsen bilateral ties as they both claim ownership of the area in the Indian Ocean said to be rich in gas and oil.

This is because, while the ICJ’s decision will be binding on both Kenya and Somalia, the Court does not have the mandate to enforce their verdicts, putting responsibility on the litigants to co-operate.

The question remains whether Kenya will convince Somalia to settle the issue out of court, as it attempted before in 2019. The rise in Somalia nationalism and the 2020 elections could be factors against President Farmaajo’s acceptance to negotiate with Kenya, even if he wanted to.