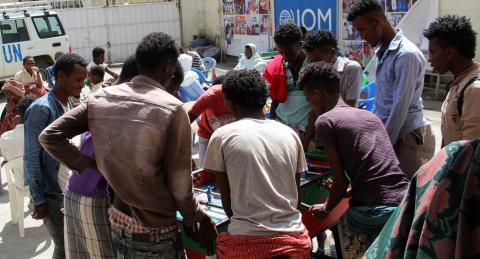 The returnees who were en-route to the Kingdom of Saudi Arabia were stranded in Djibouti where smugglers abandoned them after robbing them of their money, leaving them with no means to continue their journey or return to Ethiopia.

“I worked as an assistant loader for a truck for two years to save four thousand birr (USD 135),” Edris Ahmed (name changed) told IOM. “We paid 2,000 birr (USD 70) for the smuggler to get us to Djibouti and we spent another 2,000 birr in Djibouti for food.”

This 17-year-old was traveling with fellow teenage Ethiopians from the Tigray Regional State. They were planning to go to Yemen, hoping to continue their journey to the Kingdom of Saudi Arabia to look for work.

“In Djibouti, we suddenly found ourselves with no means to get to Yemen: There was no boat to collect us as promised, and we had no idea where the smuggler was,” he added, explaining how he and five fellow teens ended up stranded.

So far in 2019, IOM has assisted 8,987 returnees who were stranded, an increase of 3,605 compared to the 5,382 returnees assisted in 2018. This year, IOM has assisted 1,897 unaccompanied migrant children to safely return home, including many whose treacherous journeys brought them into the middle of the conflict in Yemen.

“I know of the hardships that the trip involves and about mishwar (being held for ransom) but I was not aware of the war in Yemen,” said  20 year-old Mohammed Jebel, a young man stranded in Djibouti for months.

Brought up in a family of five children in Wollo (Amhara Regional State), Moahmmed believed he had a  better chance for a prosperous future working in the Kingdom of Saudi Arabia, rather than work on the family’s farm or continue his education. Instead he was stuck in Djibo­­­uti. “I quit school at grade five; perhaps I will go back to school or find work back home,” he said, explaining his hopes for the future.

These returnees were assisted with accommodation at the IOM Emergency Migrant Response Centre in Djibouti and IOM Transit Centre in Addis Ababa, and were provided with transportation allowance so that they could reach their home.

As smugglers continue to target young men in Ethiopia, more and more migrants have been lured to travel through irregular means.

“In addition to the support it gives to vulnerable returning migrants, IOM carries out awareness raising sessions in areas that are prone to irregular migration. In collaboration with the Ministry of Labour and Social Affairs, IOM was able to use awareness raising tools such as Community Conversations and reach out to more than five million people over the past five years,” said Malambo Moonga, IOM Ethiopia’s Migration Management Unit Programme Head.

Despite these efforts, however, the number of Ethiopian migrants heading through the Eastern route through irregular means continues to increase.

Mr. Moonga added that IOM also implements livelihood support activities in migration-prone communities. “By providing additional livelihood options, we try to ensure that migration occurs as a choice and not as a necessity”. However, he admitted that the lack of funding for more livelihood programmes has rendered these efforts challenging.

The assistance provided to returnees from Djibouti on October 8 was made possible through financial support from the Ministry of Foreign Affairs of Denmark.