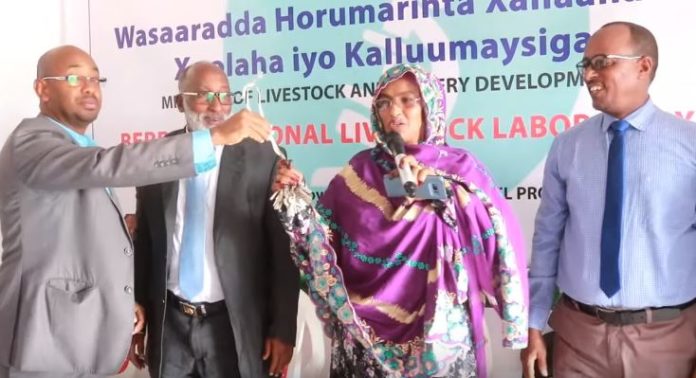 A brand new lab was implemented in Berbera which will be used to check up the medical conditions of livestock that are exported from Somaliland via the port of Berbera.
The health conditions of livestock exported from Somaliland en route to overseas were diagnosed by private quarantine facilities in Somaliland.
Mohamed Abdi who spoke on behalf of Geel has said that he was happy to hand over the keys to the assistant minister for livestock and fisheries, Ms. Yurub Abiib.
The Mayor of Berbera, Abdishakur Idin has donated the block of land that was built of the laboratory facility.
The mayor has pledged to donate lands to public buildings that will be constructed in Berbera.
The former deputy livestock minister, Ali Mohamed Elmi has revealed that the project took longer than expected to be completed and was initiated during his time as the assistant minister. This will be the first public veterinary laboratory under the control of Somaliland government.