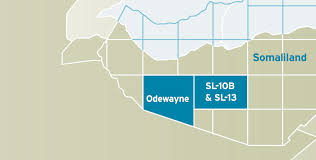 Somaliland is a highly prospective, onshore exploration province, and Genel is targeting resources of over two billion barrels of oil.

In August 2012, Genel was awarded an exploration licence for onshore blocks SL-10-B and SL-13 in Somaliland, with a 75% working interest in both. Genel extended its presence in November 2012 with the acquisition of 50% participating interest in the Odewayne Production Sharing Agreement which covers blocks SL-6, SL-7, SL-10A.

Onshore Somaliland is a relatively unexplored region, with few exploration wells drilled. The total size of the blocks is approximately equivalent to the entire Kurdistan Region of Iraq.

Interpretation of the 2018 2D seismic data together with continued basin analysis has led to the maturation of a prospects and leads inventory for the SL10B13 block (Genel 75% working interest and operator) which confirms the longstanding view that the block has significant hydrocarbon potential.  A number of potentially high impact exploration targets have been identified within play types directly analogous to the prolific Yemeni rift basins.

Once these prospects and leads have been quantified in terms of volumetric potential and associated geological risk the Company will initiate a farm-out campaign, commencing late Q3 2019. This remains consistent with the Company’s capital allocation approach, as long-term reserves replacement from legacy African exploration assets is targeted through the lowest possible capital outlay. On the Odewayne block further seismic processing is continuing in order to complete the Company’s understanding of the prospectivity of the block. In both cases the minimum work commitments and associated expenditure for the current licence periods has been met.