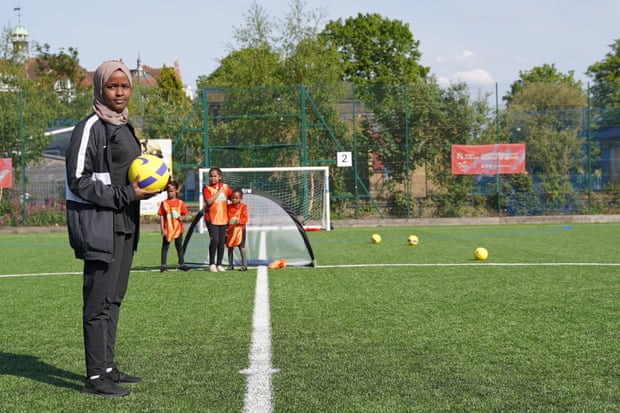 Jawahir Roble’s love of football was forged on the streets of wartorn Mogadishu. Now she is training and inspiring young female footballers in the UK.

On a sunny afternoon, a group of mothers in hijabs sit on the bench of a football pitch, watching their daughters play football at the Stonebridge recreation ground in north-west London.

As World Cup fever grips the UK, the girls’ enthusiasm for the training session is matched by their obvious adoration of their coach and referee, Jawahir Roble, known as JJ to her friends.

The training is part of a nationwide initiative sponsored by the English Football Association and aimed to benefit more than 20,000 girls aged five to 11 across the country. The programme, which was launched by the FA in 2017, aims to double girls’ participation in the sport by 2020.

But it is Roble, a Somali refugee who used to play football against a backdrop of gunshots, who has truly broken through the barriers to reach this pitch. She is the first female Muslim referee in British football.

With multiple awards, including the match official gong at the FA’s 2017 respect awards, and recognition in the sports personality category at the Somali achievement awards, she starred in the launch campaign for the new Nike-designed kit for the England women’s football team and now has her eyes set on refereeing the 2023 Women’s World Cup. “That is my next challenge, it would be a dream come true,” she says.

Born in Somalia, she fled the war there with her family when she was a child, reaching the UK aged 10. Her love for football began at home in Mogadishu when she played with kids from her neighbourhood even as intense fighting between rival clan militiamen was engulfing the city.

“We would hear loud gunshots while playing in the courtyard and then run back to the house,” she recalls. “Mum would always run looking for me and ask me to stay indoors, but we would immediately regroup after the gunshots stopped and resume playing.”

With no resources and lack of sports equipment, she used to improvise with anything she could find.

“We had no proper football, we sometimes used potatoes as a football, we used to make balls from newspapers and worn-out clothes,” she says.

Coming to the UK meant an end to living in fear, but also had its own challenges.

“Landing at Heathrow was surreal, I remember how excited I was! We made it safely,” she says. “There are many people who could not make it, so we were the lucky ones.”

At school, she saw “proper and modern” sports equipment for the first time. “I was amazed, they had proper footballs, long socks, proper pitches,“ she says.

Unable to speak English, she formed her own football team, making new friends as her passion for the game made it easier for her to grasp the language.

“I was crazy, I would play every day during break-time, lunchtime and even after school,” she says.

Roble went on went on to do a coaching course, earning FA qualifications and then taking a professional refereeing course with the Middlesex FA, quickly progressing from youth to adult games.

As a practising Muslim, she has worn a hijab throughout her career.
“Once I am in the pitch and I blow the whistle to start the game, I am not a refugee, my hijab does not matter, my gender or colour of my skin does not matter, I am a referee and I know how to do my job well, that is it,” she says.

“I see it in their eyes, some of the players and fans too, the disbelief in their faces is clear,” she says. “But I don’t let that stop me from doing my work. Refereeing is a tough job, there is a lot of pressure, you have to be focused and make quick decisions, so I don’t have time to think about what people think of me.

“When the game ends, they realise what I am capable of. Some would even come up to me to say thank you, they are like: ‘She is the best referee we ever had.’”

Roble has also become a role model for young girls in her community. The girls she trains at Stonebridge have someone who looks like them in the field and the support of their families and the wider Somali community. But her own parents were uneasy at first. “I did not have such support from my parents in the beginning, they advised me to concentrate on my studies,” she says. “It was not easy, but they have now accepted me and do support me because they believe in me.”

Her ambitions reach beyond 2023 – Roble wants to establish a training academy in her home country, and train the Somali women’s national football team. “I will definitely do that, I cannot wait when Somalia becomes peaceful,” she says.

In the meantime, she continues to inspire young girls: “I want to make them big, we are just starting from scratch but their future is bright.”