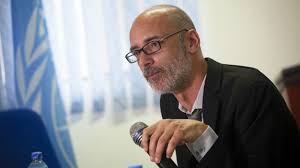 George Conway, acting deputy special representative for the U.N. Assistance Mission in Somalia, says it is critical that support goes beyond initial relief, with a focus on prevention rather than response in Somalia. Photo by: UNDP

The United Nations is asking for $710 million to provide emergency assistance to a third of Somalis by the end of the year.

But George Conway, acting deputy special representative for the U.N. Assistance Mission in Somalia, said it is critical that support goes beyond initial relief, with a focus on prevention rather than response.

“There’s an important need for the international community to agree to invest in prevention rather than waiting to respond to conditions as they escalate to very dire circumstances,” he said.

After several years of failed rains, “we need to understand that these cyclical events won’t go away and require medium to longer-term investment from the development side. Prioritizing those investments is very important,” Conway said.

In an interview with Devex, Conway explained what steps the U.N. is taking to move beyond emergency response to development efforts and the lessons it has learned so far.

What is the U.N. doing to address the situation in Somalia?

A few weeks ago, the U.N. country team launched a “Drought Response Plan” targeting 4.5 million people who are experiencing food security threats in the country. We’re actively looking to bring the humanitarian response to a scale that meaningfully impacts a large number of people across the country, addressing both the food insecurity as well as malnutrition rates, which are also skyrocketing at this time.

“The cost of investing in preventions is approximately one-third of that of responding to events.”

We’re seeking to bring humanitarian response back to levels very similar to what we saw in 2017 — when the system responded to risk of famine conditions — and help to prevent the country from experiencing a similar decline this year.

Since work has begun to address the potential famine and crisis, what lessons have you learned?

One is to ensure that we have a strong and high-quality data and analysis of the situation as it fluctuates very quickly. Seasonal climatic patterns are not reliable in the Horn of Africa and in Somalia in particular. It’s the case that four or five months ago we expected much better seasonal rain than what we’ve been seeing in recent months and we’ve had to change our forecast quite quickly … That requires a certain flexibility in the system to respond to very rapid shifts in our analytical understanding of what the context is.

How is the U.N. shifting its strategy from emergency response to longer-term planning?

This is an issue with which the U.N. has been engaging with the Somali government at different levels for some time now. Whilst the urgency of life-saving humanitarian response continues, there’s a need to invest more in preventative measures on the development side toward breaking the cycle of the recurrent crisis in Somalia. We know looking back — not just over many years but many decades — that these sorts of crises are cyclical and are recurrent and in fact, the cycles are getting shorter in their duration and more extreme in their impact.

We worked with the government to undertake a drought impact and needs assessment, in preparation for a 2018/19 recovery and resilience framework that is explicitly intended to target investments toward addressing the underlying causes of these recurrent issues for the country … [such as] issues around water management, community-level resilience, and social safety nets. Hopefully, as the country progresses on its development path, we can start to offset against the longer-term risks.

What plans do you have to help rebuild some of the communities affected by this drought season?

The government itself has been ordered to undertake consultations across the country in all of the federal member states and, in many cases, go down to the community level to look at the impact of protracted drought and to understand … what needs to be done … to better prepare communities.

The government itself has highly prioritized the so-called Heavily Indebted Poor Country Initiative as a path toward debt relief, in order to expand the development of resources that are available for Somalia. Right now, the amount of resources to address community-level needs is insufficient and the country needs to expand its developmental financing …

[But] we know that the cost of investing in preventions is approximately one-third of that of responding to events. This goes across all sectors. The cost of addressing moderate acute malnutrition is one-quarter of that of addressing severe malnutrition. The cost of treating livestock for diseases that result from waterborne shortages is probably one 100th of the cost of replacing livestock, and preventing a drought resulting in famine equals one-third of the cost of responding to a famine-like condition.