Ethiopian Prime Minister Abiy Ahmed governs like a man running short on time. After less than six months in office, the youthful leader has presided over impressive internal ethnic and political reconciliation, has established peace with Eritrea and has begun ambitious economic privatization efforts. The changes have come so quickly that many question whether they are sustainable. And while there are many limitations to just how much Abiy can accomplish, it’s very possible that he will establish a new level of stability and economic opportunity in the East African country of 100 million people.

What Abiy Has Accomplished

The wave of support for Abiy emerged from massive protests against the government in 2016. At that time, an angry and increasingly educated youth population, shut out from the top-heavy economy, began expressing its discontent across the country — from the large and marginalized region of Oromia across the highland core to Amhara. The growing destabilization heaped pressure on Addis Ababa’s governing elites. Led by hard-liners within the Tigray People’s Liberation Front, a critical source of power in Ethiopia’s ruling coalition, Addis Ababa turned to repression, cracking down on all kinds of dissent. Nevertheless, the protests persisted well into 2017, forcing the Ethiopian People’s Revolutionary Democratic Front (EPRDF), the ruling coalition, to begin internal deliberations about how it needed to adjust its strategy.

Once they realized that repressing the protests could not save the system, the elites banked on reconciling with the uncontrollable regions, and that’s when the 42-year-old former military officer Abiy stepped up. Hailing from the restive Oromo region, Abiy boasted a diverse ethnic background, and he was equal parts a product of the system and a clear reformer of it, enabling him to win support from key power bases across ethnic lines in the ruling coalition.

Since taking office in April, Abiy has overseen a “purge” of hard-liners who had failed to create a more stable security environment and had lost internal party credibility in the process. These efforts increased after a likely attempt on Abiy’s life in June. The government has removed several key figures, including top chiefs of the military and intelligence service. Abiy and his allies have coupled this purge with overtures to parts of the opposition — those agitating for reform inside and outside of Ethiopia. They have also released political prisoners and loosened media restrictions, among other things. Exiles have flocked back to the country. At the same time, the internal security environment has improved; attacks on foreign businesses and other targets have slowed while public trust in Abiy’s government has grown. However, additional progress is likely to stall as local groups — as well as some returning hard-line activists — agitate against their ideological opponents. This disrupting influence will hamper Abiy’s ability to consolidate power at lower levels, opening up room for some groups and biased police to fuel ethnic flare-ups.

After making such swift and dramatic progress domestically, Abiy and his allies then turned to Ethiopia’s external challenges, with the country’s enmity toward Eritrea being key among them. The two sides fought a border war during 1998-2000 after the former province had broken away from Ethiopia in a decadeslong insurgency. That break left Addis Ababa without sea access and the markets beyond. Relations between the two have been acrimonious since the war, and Eritrea has rejected previous overtures from Ethiopia.

But Abiy and his allies have quickly changed the relationship. For over 20 years, security decisions on Eritrea had been handled by hard-liners within the powerful Tigray People’s Liberation Front, who had major personal conflicts with the leadership in Asmara, Eritrea’s capital. The new president sidelined these elites, showing reclusive Eritrean President Isaias Afwerki that he intended to be a serious partner for peace. (This is convenient for Ethiopia’s allies, including the United Arab Emirates, Saudi Arabia and the United States, which have been pushing Addis Ababa to agree to a postwar ruling over disputed territory.) 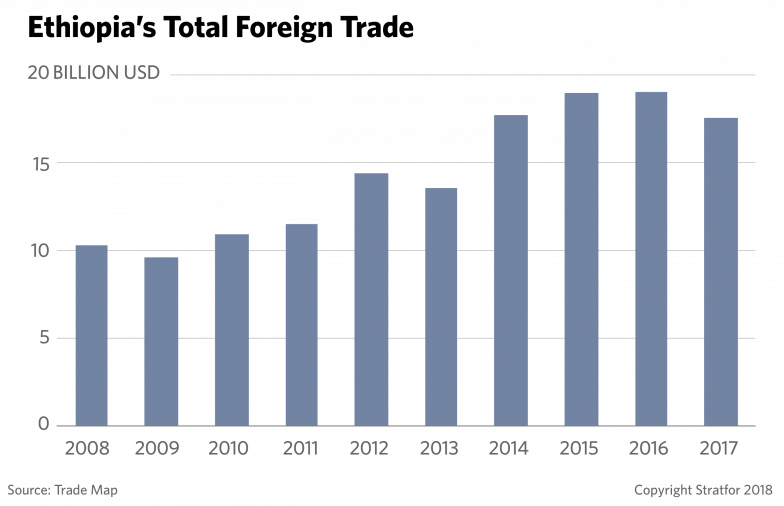 Abiy has also pushed hard for greater privatization of the economy, which is still weighted heavily toward public spending as a result of the country’s recent communist past. Hailing from Oromia and being relatively young, Abiy understands that a key protest grievance has been the economy’s exclusion of increasingly educated young Ethiopians. For many years its impressive growth has been mainly driven by government-sponsored projects, while entrenched, predatory elites and a notoriously risk-averse bureaucracy suppressed entrepreneurism.

However, the country’s deep foreign currency shortage caused by large-scale government projects has forced those elites to rethink their approach, allowing Abiy to push for the partial privatization of huge state-owned companies such as Ethiopian Airlines (the key generator of foreign currency), Ethio Telecom (the local cash cow) and Ethiopian Shipping and Logistics. Full privatization has been promised for other state-owned enterprises, including industrial parks, hotels and railway projects. That the country represents a growing market of 100 million citizens has not been lost on potential investors and allies, such as the United Arab Emirates. After the emir visited Addis Ababa in June, the Emirates decided to deposit $1 billion in the Ethiopian central bank to help ease the country’s foreign exchange shortage.

The recent docking of an Ethiopian commercial ship at the Eritrean port of Massawa — the first in over 20 years — is a clear sign that the rapprochement is real and not just political rhetoric. And repaired ties between Eritrea and Ethiopia will likely be an economic boon for both countries. Ethiopia will now have another country to import and export goods through; it now relies on Djibouti for 95 percent for this exchange. And cargo transport times for goods coming from Ethiopia’s north will be shorter, helping reduce costs and probably providing a boost for residents in the north looking to import and export products that were not economical via the Djibouti route.

For Asmara, the benefits are also clear. Eritrea has been under crippling international sanctions for over a decade due to alleged support for militants in neighboring Somalia, and renewed peace has opened the door to future normalization. Ethiopia and others in the region have supported removing U.N. sanctions on Eritrea, opening Asmara up to more large investments from Gulf Cooperation Council states and others. And this input could provide a new flow of foreign currency for the cash-strapped country. However, Asmara will likely need to show greater signs of reform before the United States and others agree to remove sanctions.

The State of Investments

There are still constraints on Ethiopia, such as the foreign exchange crunch that continues to slow the economy. During a July trip to the United States, Abiy tried to tap into Ethiopia’s 3 million-strong global diaspora, asking them to send remittances home through official channels while setting up a new sovereign wealth fund to which the diaspora could donate. At the same time, the black market reduced its exchange rates, creating incentive for the diaspora to send more money back via banks and helping increase foreign currency flows to Addis Ababa. The measures have had an impact, but the crunch will likely persist for years and reduce Addis Ababa’s appetite for new large projects — especially since evidence suggests that Chinese investment interest is waning due to mounting concerns about debt and slower-than-expected returns on massive projects such as the $4 billion Addis Ababa-Djibouti railway, completed in 2017.

Other countries, however, are not shying away. The United Arab Emirates has reportedly been a key force in Ethiopia’s rapprochement with Eritrea, no doubt as part of Abu Dhabi’s strategy to further diversify its oil-based economy. Once Ethiopia and Eritrea are on good terms again, the Emirates could efficiently link its long-term investments in ports in Eritrea (and also Somaliland) to its current and likely expanded investments in Ethiopia. That Ethiopia’s investment board opened the logistics sector to minority joint venture foreign investment on Sept. 7 is likely no coincidence. Recent trips by emirati officials to an industrial park in Jimma, in the Oromia region, suggest that Abu Dhabi could acquire such an investment — and also the logistics network necessary to export the manufactured goods through Eritrea and other coastal neighbors.

The Horn of Africa is changing rapidly, and Abiy appears to be leading the way. His ambitious moves to transform Ethiopia for the future will remain a key story in the months ahead.