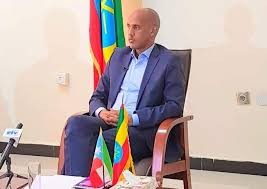 Jigjiga  – An event is organized in Jigjiga the Capital of the Somali region of Ethiopia to launch a European Union-funded project of Stimulating Economic Opportunities and Job Creation for Refugees and Host Communities in the Somali Region of Ethiopia.

This is the first time this  20 million Euros project to be launched in Ethiopia to support Refugees and host communities in the country.

The event is participated by the Somali Region Region of Ethiopia President, Mustafe Omar Agjar, Ethiopian Federal State Minister for Urban Planning and Development,Mr. Khalid Abdirahman and officials from the European Union, World Bank and Country Representatives of UNHCR, MERCY CORPS and DRC.

President Mustafe assured that refugees and displaced persons in the region have received maximum support and welcome from the locals and have integrated into their own ways but the psychological part of reintegration is still missing.

He noted that it is difficult to distinguish between Refugees and local citizens because both of them are Somali origin, and this project will help both locals and refugees to have employment and become economically self-sufficient.

The president said that this comes after one year of progress and reform in the Somali Region in terms of Political Stability, security and respect for Human rights.