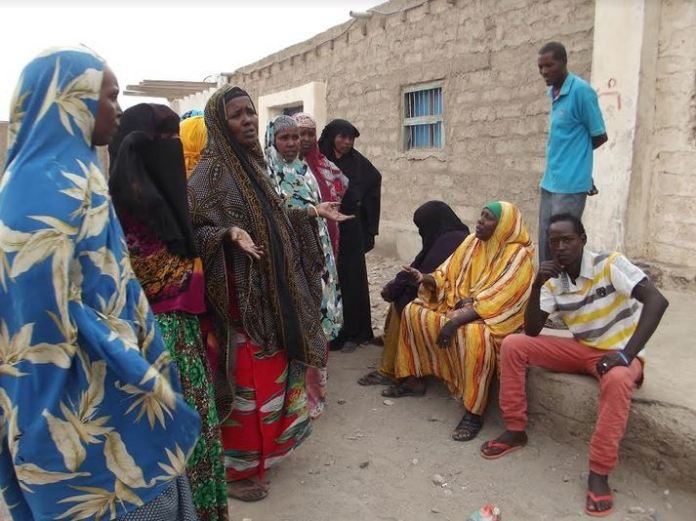 Displaced families from the Somali region of Ethiopia living on the outskirts of Badhan town in northern Somalia’s Sanag region are surviving under difficult conditions without access to food and proper shelter.

The 27 families, who fled from conflict between Somalis and Oromos in eastern Ethiopia, have been in Badhan since September.

Muhibo Ali Ibrahim and her six children fled their home in Jina’asani village on the border between Somali and Oromo states in Ethiopia in September, after a conflict broke out.

After trekking for days, she arrived in Lako village near Badhan town, where she built a make-shift hut from clothes and sticks.

The shelter she now calls ‘home’ has been saturated in the ongoing rain.

“We live a miserable life; this shack cannot shelter us from the rain and the cold. Me and my children have slept in this leaking hut as rain pounds the area, and all our foodstuff is soaked,” Muhibo told Radio Ergo.

Saeed Mohamed Salah, an official from Puntland’s Refugee and IDP Affairs Committee, told Radio Ergo that the families displaced were not receiving any assistance.

“These people face dire conditions, they live in shanties. They neither have blankets nor food and the host community has nothing to offer them. They need urgent support,” he explained.

Abdi Ahmed Dahir, a father with two children, left his wife and his parents in Jigjiga town in Ethiopia. He has been living with his children in Lako village in Badhansince September. He now wants to bring his other family members over the border if he canget money for their travel.

According to Abdi, the journey took them two nights and two days. He does not wish to return to Ethiopia.

“We have peace here. I do not know if I would return to Ethiopia. Although I had a livelihood there,the area is engulfed by clashes,” he said.

None of the families say they have any intention of returning to Ethiopia at the moment, as the conflict has not yet been resolved.

Deadly clashes broke out in the Somali-Oromo border townsin September 2017 and resumed again in May 2018.

According to a report by the UN Office for the Coordination of Humanitarian Affairs (OCHA) and Ethiopia’s National Disaster Risk Management Commission (NDRMC), 1,073,7642 people were displaced by conflict as of mid-April 2018.

Though some were displaced since 2012, the report notes that the vast majority of the displacements occurred after September 2017 in Oromia and Somali regions.