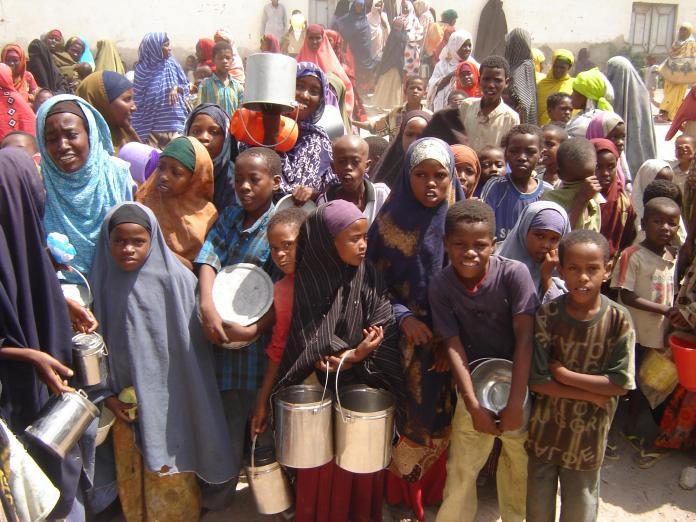 Faced by growing insecurity for staff and the need to cut out delays in food distribution to affected communities, aid agencies have increasingly been opting for direct cash transfers.

But this relatively new model of humanitarian assistance is being questioned by authorities and local economists in Somaliland.

Since 2013, cash assistance programmes for people affected by war and drought-induced crisis have become a preferred option, with thousands of recipients now receiving monthly cash through their mobile phones.

Abdiaziz Ali Adani, head of communication in Somaliland for the international NGO Oxfam, told Radio Ergo that aid agencies adopted cash assistance programmes for affected people to enhance accountability and to give hope to the beneficiaries.

He said Oxfam’s cash assistance was supporting thousands of people in 95 villages in Togdher, Sool and Sanag regions.

“The programme focuses on the most vulnerable individuals including aged people, orphans and sick people through committees in the camps,” Abdiaziz said, adding: “Each beneficiary gets $85 per month.”

However, the extensive use of cash is facing opposition from local authorities and professionals, who claim the programmes make people more dependent and deny them the chance to rebuild their lives.

Abdikarim Ahmed Hinif, the chairperson of Somaliland Refugees and IDP Committee, estimated the amount spent annually on cash transfers adds up to $6,507, 840.  This could have been invested in projects supporting durable and sustainable solutions for the displaced.

“In three months, over $1 million is reportedly spent on the [cash assistance] programme targeting 6,779 families in Somaliland. With over $6,000,000 annually, such money could have been used to buy about 216,900 head of goats. On average, every family would get about 46 goats and that would be a life-changing progress,”Hinifargued.

Hinif said Somaliland authorities will be meeting with aid agencies operating in the region next month to address these issues and find sustainable solutions to internal displacement.

“In December, we are planning to sit with the agencies over the need for reforms and establishing effective approaches to support 150,000 IDPs in five regions in Somaliland,” said Hinif.

Abdikadir Mohamud Yonis, an economist based in Hargeisa town, shared a similar view.  Speaking to Radio Ergo, Yonis said the agencies could have supported affected families by buying livestock for them so that they can earn their own living without having to depend on monthly cash transfers.

“The agencies should be kept accountable. They should focus on where the problems lie. This programme is just like distributing food and should be stopped. We need a plan to support these people to return to their previous livelihood,” Yonis said.

Despite such criticism, however, the delivery of cash seems to be a popular approach among the recipients.

Shamis Elmi Mohamed, a mother of nine, fled a rural area on the outskirts of Erigavo after she lost 500 goats in 2016 to the drought.

After resettling in Gar-Adag village, 187km from Erigavo town, the aid agencies registered her as one of the beneficiaries of the cash assistance programme.

Although she still faces some challenges including lack of access to education for her children, Shamis receives $85 per month that she uses to support her family.

Shamis expressed satisfaction with the cash programme, saying her life had improved as a result.

“My life has completely changed. We live a better life now. We have adopted the town’s lifestyle, we have food and clothes,”Shamis told Radio Ergo.

Amina gets 25kg of sugar, rice, flour, 20g of pasta, and nine litres of cooking oil worth $85 at the end of each month from a nearby a shop in Guriel town in central Somalia.

The cost of the food is met by WFP, which works through a network of locally approved stores.

Amina, with a family of 12, fled her home in Daba-Yodley village 45 km from Guriel town.

“All my goats perished during the drought, we live now in shanties. We receive food every month, it is little for survival but it helps,” she told Radio Ergo.

According to the spokesperson of Guriel IDPs’ Umbrella, Mohamed Moalim Hassan, about 480 of the IDPs receive money through a cash assistance programme funded by Norwegian Refugee Council (NRC), while 400 others get the same amount of support in the form of foodstuff through WFP.