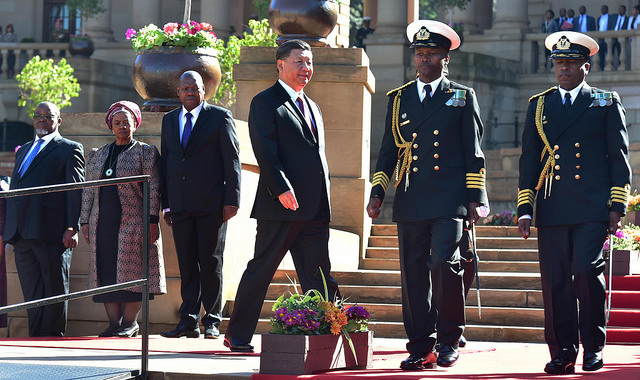 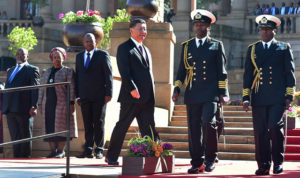 The gun barrels had barely cooled after fighting in South Sudan a year ago when a tentative truce coincided with the arrival on Juba’s streets of Chinese workers in their high-vis vests.

In cars or on the open backs of trucks, the Chinese workers are engaged on all sorts of projects—energy, engineering, construction, telecommunications, medical services, hotels, restaurants and retail. Their vehicles stand out because they’re not armoured and don’t bear the logos of the United Nations or a non-government organisation.

South Sudan gained its independence from the Republic of Sudan in 2011, but the latest in a series of civil wars has continued there since 2013. Despite the violence, Zhong Jianhua, China’s former special representative on African affairs, once called the new country a ‘paradise for investors’ and by 2013 close to 100 Chinese companies were registered there. China sees the young nation as a vital source of raw materials, especially oil, but it’s also an opportunity for Beijing to demonstrate its commitment as a good international citizen through its UN peacekeeping deployment.

China has contributed successive contingents of peacekeepers to South Sudan and two of its soldiers were killed there in July 2016. China helps run camps for internally displaced people and its soldiers rarely venture out onto Juba’s streets. Unlike many Western nations, China doesn’t have an independent NGO operating in South Sudan and there’s concern locally that its presence there is driven more by self-interest than by humanitarian goodwill.

China’s footprint dates back two decades to the discovery of oil in the region that is now South Sudan. In what has been considered China’s riskiest economic gamble in Africa, it constructed oil pipelines in the midst of the south’s war for independence. Now, the China National Petroleum Corporation controls around 40% of the country’s two main oil producers.

In 2015, a Chinese attempt to broker a peace deal between the warring parties failed, but Beijing came out a winner by securing pacts from both sides not to attack oil infrastructure. During the war with the south, China provided weapons to Sudan to help it protect the southern oil fields but since the south’s independence, Beijing has become the leading provider of weapons to South Sudan’s national forces. It’s used its veto on the UN Security Council to shield both South Sudan and Sudan from western-sponsored sanctions against the leaders of both countries.

Beijing has an embassy in Juba and has worked hard to portray itself as driven by humanitarian motives rather than self-interest. It’s built a US$6 million hospital in Rumbek, renovated Juba Teaching Hospital and established many more health facilities elsewhere, while providing relief supplies including rice, blankets, mosquito nets and tents.

For the South Sudanese government, desperate to recover from the damage done by years of civil war, the help is heaven sent. Parts of the country are still embroiled in conflict and half of its population has fled fighting and the fear of starvation to live in sprawling UN camps in Juba and other cities, or has left South Sudan altogether.

The situation has provided an opportunity for China to increase its influence on the massive continent and its access to Africa’s abundant resources, and to expand its strategic footprint.

China’s practice of offering huge loans with obscure terms and conditions has been criticised in the west, with fears African countries will become trapped in a cycle of debt. The recipients of such loans are often defensive when issues about their lack of transparency are brought to light in the media. Huge reserves of raw materials may be regarded as collateral, giving China unlimited access to untapped resources if nations are unable to repay loans.

President Xi Jinping’s trip to Africa last month highlighted how much the continent matters to China. Economically, no country now has greater depth and breadth of engagement there than China. It’s estimated that more than 10,000 Chinese-owned firms operate thereand different scenarios project revenue of between US$250 billion and US$440 billion by 2025.

China is Kenya’s largest creditor and owns approximately 70% of its external debt. In 2014 China loaned US$3.2 billion for a new railway between Mombasa and Nairobi which was built by the state-owned China Communications Construction Company and China Road and Bridge Corporation.

Beijing may feel, as its investment in the region grows and its dependence on Africa’s resources increases, that it needs a greater military presence to safeguard its economic interests and to protect the growing numbers—now up to 1.1 million—of its citizens living in Africa. China has established a military base in Djibouti and it may seek similar facilitiesas its economic interests grow in countries like Sudan and Kenya.

Beijing has also shown strong interest in the small archipelagic nation of Sao Tome and Principe, which the World Bank says has ‘no single economic activity that serves as a driver for growth’. China has dispatched Foreign Minister Wang Yi to the small nation, which is well located to become a transport hub and strategically situated for a naval facility.

For the citizens of South Sudan, Beijing’s help brings mixed blessings. A report by the South Sudan Council of States in 2014 found a lack of regulation and oversight of oil companies operating in the Upper Nile regions of Paloch, Pariang, Meluth, and Adar. Poor waste disposal procedures by a Chinese oil company and spillages forced the displacement of communities. The pollution has been blamed for miscarriages, stillbirths, and babies born with illnesses and severe deformities, and livestock are reported to have died after drinking the same water.

As its Belt and Road Initiative accelerates, Beijing will want Africa to play a greater role in China’s economic growth. Chinese investment will help build economic infrastructure and improve service delivery and Africa will provide a market for Chinese goods. But many on the continent fear that as long as there are minerals in the ground, there’ll be the risk that hasty extraction will cause the sorts of environmental problems and community disruption that’s occurred in South Sudan and elsewhere.

Aru Kok is a research intern at ASPI. Image courtesy of GovernmentZA on Flickr.