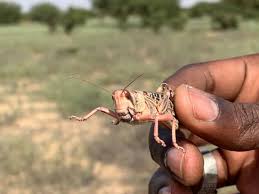 HARGEISA, Somalia, March 30 (Thomson Reuters Foundation) – When the phone call came offering me the chance to report from the ground on the worst outbreak of locusts in the Horn of Africa in a quarter of a century, it was a no-brainer.

“We’re taking some journalists to see how the locusts have affected communities in Somaliland,” said Alberto Trillo Barca from the United Nations’ Food and Agriculture Organization (FAO). “Are you interested? We need know by the end of the day.”

Over the past two months, I had been reporting from my desk in Nairobi on how billions of desert locusts have swept into Kenya, Somalia and Ethiopia, devouring large swathes of crops and pastures and deepening a hunger crisis.

On crackly phone lines, skype calls and through WhatsApp messages, I interviewed entomologists, aid workers, plant protection experts, agriculture workers and climate scientists – trying to get a grip on the devastation the insects could bring.

Not only was this trip a chance to see for myself and report on a story I had never covered in my two decades as a journalist, it was an opportunity to visit Somaliland, a state largely unrecognised by the rest of the world.

Five days later – equipped with my standard medical kit, mosquito repellent and protein bars – I was on a flight to the Ethiopian capital, Addis Ababa, to take a connecting propeller-driven aircraft to Hargeisa, Somaliland’s main city.

Located on Africa’s northeast coast along the Gulf of Aden, Somaliland has operated independently from Somalia since 1991, with its own president, parliament, currency and international airport – but it is not globally recognised as a country.

Drought-prone and impoverished, the semi-arid state of 4.5 million people is largely dependent on remittances from the diaspora and rearing livestock for export.

For centuries, the pastoralist communities have criss-crossed the plains moving with their families and herds of camels, sheep and goats in search of water and grazing pastures.

Trekking vast distances, these nomads carry their homes – known as “akals” and made of branches and animal skins – in soaring temperatures and across inhospitable terrain.

The country is also often falsely perceived as insecure as its southern neighbour, Somalia, which has been wracked by attacks by al Shabaab Islamist militants for years.

As a result, few foreigners venture here – other than Somalilanders from the diaspora, aid workers, donors, adventure tourists and, of course, the odd journalist.

“Somaliland is not Somalia,” said a local FAO official, greeting me and two other journalists as we descended from the aircraft and walked across the small runway into the VIP arrivals terminal at Hargeisa airport.

“It is very safe here. You can travel hundreds of kilometres to the coastal areas without any problems,” he added.

It was a phrase repeated by many local people throughout our four-day trip. But even so, no one likes to take chances in Somaliland – especially if you are carrying a bunch of foreign journalists reporting a humanitarian crisis.

After a overnight stay at a U.N.-approved Hargeisa hotel, we headed to the FAO office for a security briefing, complete with instructions on how to use the radio handsets were given.

We then left the city in an eight car convoy – two filled with armed escorts with AK-47’s from Somaliland’s police force.

As we drove out of the sprawling, dusty city of pot-holed roads and ramshackle buildings and the landscape turned to rugged, barren desert, we soon realised that it was not insecurity, but finding the locusts that would present the bigger challenge.

“So we were not going to Lughaya now. We have heard from field that the locusts have moved from that area now,” said FAO’s Barco some hours later as the convoy halted at the side of the road and we stepped out of the cars to stretch our legs.

There was little we could do. From my reporting, I knew that the swarms were highly mobile, capable of moving distances of up to 150 km in day. Once they had feasted in one area, they would set off as the wind carried them in search of their next meal.

Even so I couldn’t help my disappointment. Like the other journalists, I was keen to get similar footage and pictures of the colossal swarms that we had seen in the reporting done by colleagues in neighbouring Kenya and Ethiopia.

We agreed, however, to change tack and proceed to a nearby village recently infested by the locusts to understand how it had affected the lives of people, dependent on farming and livestock rearing for their survival.

The residents of Botor village painted a bleak picture.

They spoke of how the sky had turned dark when the giant, black cloud of locusts swept into their dusty hamlet, and began feasting on their fields of maize and millet.

Villagers burned rubbish and banged on pots and pans to chase the insects away, but to no avail. By the time the swarm departed the following day, 60% of Botor’s crops had been eaten.

It wasn’t hard to believe. A swarm of a square kilometre contains 40-80 million locusts and can eat the same amount of food in one day as 35,000 people, according to the FAO.

“Only Allah will have the power to save us if it happens again,” said Abdi Shakur Muhammed, chief of Botor village, as he sat on a plastic mat under the shade of a tree.

It was not until next day that I understood what he meant.

Setting off just before sunrise from our hotel in the town of Borama, near the border with Ethiopia, we drove for hours along pot-holed roads and through dried river beds, past groups of nomads with their herds of camels, in search of the locusts.

Finally, in a dense patch of scrub, they came into sight.

Fluttering in a pink-tinged cloud of thousands, the swarm of locusts admittedly didn’t look as ominous as I had expected.

“Don’t be fooled,” said Mohamed Mohamoud, director of Somaliland’s plant protection department, pouncing on an adolescent locust and holding it up between his fingers.

“These locusts are the second generation – their population is 20 times larger than the previous. There are countless swarms like these across east Africa. Once they become adults and take flight, the destruction they can do is unimaginable.”

As I wandered across the scrub and through the swarm, I examined how the tiny leaves on the bushes had already been eaten by the insects. Some bushes had been stripped clean.

For communities in this part of Somaliland, still reeling from a drought in 2018 which starved to death more than 70% of their animals, there may be little escape from the devastation which looms ahead.

As I returned to our 4X4s and we headed back across the barren plains to Hargeisa to catch a flight home to Nairobi, that familiar feeling of helplessness, that many journalists covering humanitarian crises get, grew inside me.

“We always get to leave,” I thought, as I looked into the car’s rear view mirror and the swarm of locusts vanished in the cloud of dust behind us.