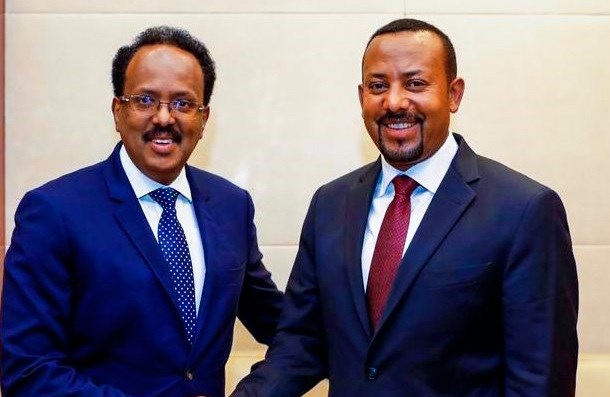 Somalia’s president Mohmed Abdullahi Farmajo held discussions with Abiy Ahmed, who was approved by Ethiopia’s parliament as PM for a five-year-term on Monday.

Farmajo took his trip abroad on Monday to Ethiopia since April when an extension of his term stoked tensions and led to confrontations between two rival army factions that have riven the capital Mogadishu.

He was received in a green yellow carpet treatment upon arrival at Addis Ababa airport.

His visit came amid heightened rift with the PM and escalating political wrangling despite growing int’l calls for de-escalation of tensions and resumption of talks to end the differences.

In his speech, he had delivered at the inauguration ceremony of Ethiopian PM, Farmajo said Ethiopia and Somalia enjoy historical bilateral relations and a strong bond of friendship built on mutual respect, strong people to people relations and increasing inter-dependence.

He wished success for Abiy Ahmed and his new administration.