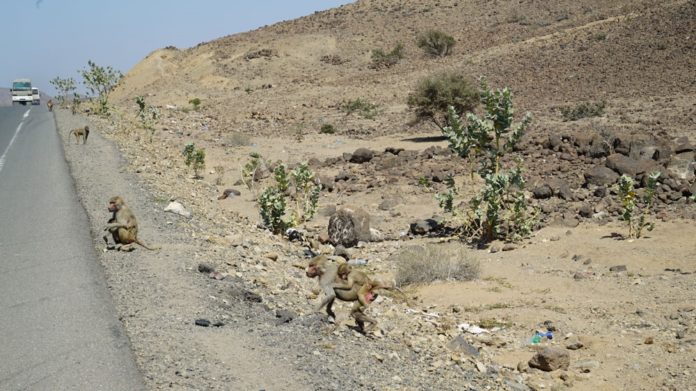 Scores of refugees have refused to be housed in Saudi-funded units over the kingdom’s military campaign in Yemen.

Markazi refugee camp, Djibouti – Khalid Muhammad and his young family were enjoying their first good night’s sleep in days when a troop of baboons attacked their tent last August.

At first, they thought the loud grunts and barks would pass. But when the baboons broke through the thin plastic sheets that make up their home, they knew they had only seconds to escape.

As he grabbed his family and ran for cover, the pots and pans which still had leftovers from the previous night’s dinner were flung into the air.

As the smell of food wafted through the tent, every trace of it from their kitchen was taken away by the invading animals.

“They took everything we had,” Muhammad, a father of three, told Al Jazeera. “Bags of rice, flour, vegetables – everything was gone. It was supposed to last us until the end of the month.”

Around 190,000 Yemenis and foreign nationals like Muhammad have fled Yemen’s war after Saudi Arabia entered the country’s civil war in March, 2015.

At least 37,000 Yemenis arrived in Djibouti, an impoverished country which sits just 100km west of Muhammad’s hometown of Taiz.

According to the United Nations, some 2,200 Yemenis are currently registered at the Markazi refugee camp, but more than 10,000 have sought refuge elsewhere, either opening restaurants and cafes with friends and relatives in capital city, Djibouti, or opting to return home.

“When I first arrived here, there was no fence around the camp, there were no toilets, there was nothing,” Muhammad said.

“I asked the UNHCR for more protection, I said I’d help erect a bigger fence, I asked them for help, I even got a petition together. But until now there’s been no response”.

While the camp’s surroundings are made of stunning landscapes of sand and volcanic rock, the former French colony is poor and excruciatingly hot, with temperatures exceeding 50 Celsius in the summer.

According to the refugees and medical officials, the cries of hyenas and wolves echo late into the night, while snakes and scorpions are known to frequently attack the inhabitants.

On top of all that, there are the baboons.

Just metres away from the camp’s main entrance, Al Jazeera observed a troop of around 40 baboons waiting in the sun-parched dirt for rubbish and waste to be thrown out.

When it isn’t, they throng to the camp.

In November, more than three and a half years after it entered Yemen’s war, Saudi Arabia inaugurated 300 shipping-container style housing units to accommodate some 1,200 refugees here.

Built at a cost of $6.5m, each of the 300 air-conditioned units included a toilet, bedroom, living room and kitchen, along with cooking facilities.

While the development was welcomed by many, a sizeable number of Markazi’s inhabitants refused to be relocated.

Several of them said the units were too small to hold their large families, while others said they couldn’t stomach living in units donated by the kingdom while it continued its aerial bombardment of Yemen.

“While the majority of the refugees are living in prefabricated houses, there are around 10-15 percent of them who are still in the tents,” said Vanessa Panaligan, the UN’s media relations officer in Djibouti.

“They’ve either refused to move citing political reasons, or their families are too big to fit into the units.”

Muhammad, who refused to relocate, said while the units “represented an improvement” in peoples’ conditions, they were “not the solution to our underlying problem”.

“There is no major difference between the units and the tents,” he said. “In contrast, the tents are much better, especially in the summer. The units turn into an oven, they’re incredibly hot.”

“In the tents, the air is open, but in the units you can’t get any air, you can’t breathe, or even feel the breeze,” he said.

‘Worst place for a child’

The aerial campaign in Yemen, now entering its fourth year, has devastated the country, with data collected by Al Jazeera and the Yemen Data Project revealing that weddings, funerals, schools and hospitals have frequently been targeted.

Under the leadership of Saudi Crown Prince Mohammed bin Salman, the alleged architect of the war, the alliance has also imposed a raft of punitive economic measures on Yemen, aimed at undercutting the Houthi rebels’ grip on power, including a debilitating blockade on the port city of Hodeidah, a vital gateway for food, fuel, medicine and other goods into the country.

Hemmed in by the fighting, more than 18 million civilians are currently living under Houthi control, with the remaining 10 million forced to live in areas contested by armed groups, including al-Qaeda in the Arabian Peninsula (AQAP), the Islamic State of Iraq and the Levant (ISIL or ISIS), and fighters backed by the UAE.

“Today, Yemen is the worst place on earth for a child,” Geert Cappelaere, UNICEF’s Regional Director for the Middle East and North Africa, told Al Jazeera earlier this week.

With a child dying every 10 minutes due to preventable diseases, Cappelaere urged the warring parties “to think of their own children when they sit at the negotiating table next time”.

Sleeping on blankets donated by the UK and eating from tins marked ‘USAID’, Muhammad said his hopes had been dashed after fighting resurfaced following last year’s Stockholm agreement.

“All the conferences, all the negotiations, they’re useless, a waste of time and money,” he said.

“We’re all fed up. I just want to go to a third country, where I can get healthcare, a good education for my children, something which we can’t get here.”