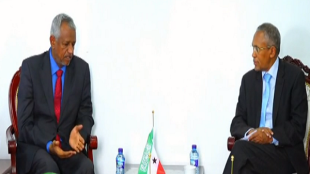 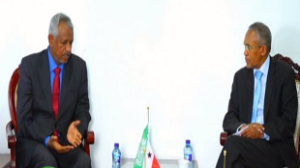 HARGEISA–Sudan will be part of countries that is invited to attend the stalled talks between Somaliland & Somalia.

This was disclosed by country’s foreign minister, Dr. Sa’ad Ali Shire who held discussions with Mr. Kamal Mohamed Ubaydi, deputy chairperson of Africa Int’l university who has pad a courtesy call to Somaliland.

The FM briefed the visiting chairman of the rebirth of Somaliland, the long standing brotherly ties between the two countries and how Sudan is to address the hardships of students from Somaliland encounter while they stay in the country for pursuing their tertiary education. Dr. Sa’ad said that Sudan is a country well known for its unwavering commitment to resolve conflicts raging in Africa. The FM stated clearly that he reached an understanding with Mr. Kamal that Sudan should have an active role in the mediation process between Somalia and Somaliland. The two sides have agreed to boost the ties between the countries in the areas of culture.