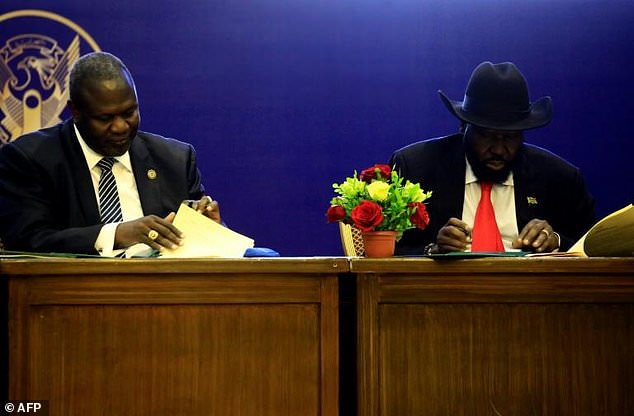 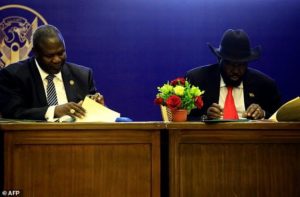 South Sudanese rebel chief Riek Machar on Thursday approved a peace deal with Juba that is expected to be formally signed at a summit of regional leaders, a Sudanese mediator said.

Machar and arch-foe South Sudan’s President Salva Kiir have held weeks of talks in Khartoum in search of a comprehensive peace deal to end the conflict, which has killed tens of thousands and displaced millions since 2013.

The warring parties have already inked several agreements, including a permanent ceasefire and a power-sharing deal that sees Machar returning as first vice president.

Machar had initially refused to approve the deal on Tuesday, before finally agreeing to it after mediation by Khartoum.

The deal has already been approved by Juba, and on Thursday Machar’s group and representatives of some other rebel factions initialled it, an AFP correspondent reported.

“The final signing of the peace deal will happen at a summit of IGAD,” Sudanese Foreign Minister Al-Dierdiry Ahmed said, referring to the East African bloc that has pushed the latest initiative to end the war.

“The date for the summit will be announced soon,” he said, adding negotiations in Khartoum had now ended.

On Tuesday, Machar and other opposition groups said they had some reservations concerning the accord that had not been acknowledged.

The rebels had differences over the functioning of a proposed transitional government, how many states the country should be divided into and on the writing of a new constitution.

“The concerns of these parties will be discussed at IGAD summit,” Ahmed said.

Earlier this month, Kiir and Machar signed a power-sharing deal that will see the rebel leader return as the first of five vice presidents.

That accord paved the way for drafting of a final peace deal and is expected to lead to the formation of a transitional government to be in power until elections are held.

South Sudan spiralled into a devastating civil war little over two years after it became independent from Sudan in 2011.

The conflict pitted Kiir against Machar after Kiir accused his former deputy of plotting a coup.

It has seen widespread rape and murder of civilians, often along ethnic lines, and uprooted roughly a third of the population.