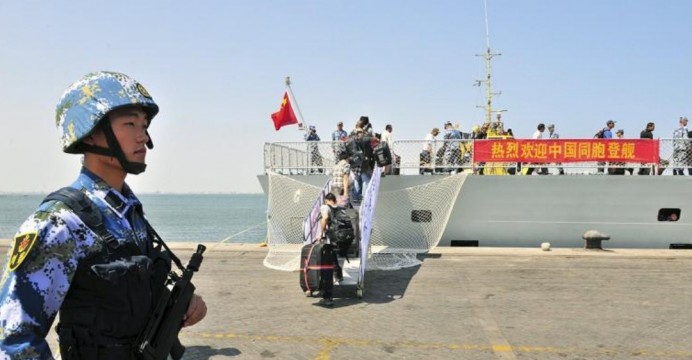 One reason I have for visiting East African countries is to find out more about Africa’s significance as a strategic base in the context of China’s Belt and Road policy.

There are traces of Chinese enterprises everywhere as we approach the Doraleh waterfront, about 5 kilometers west of Djibouti City, and note the prevalent use of Chinese slogans. But one rarely sees the presence of Chinese naval army based there.

Originally a French colony, Djibouti now hosts France’s sole strategic base in East Africa. Because of the need for defense of the Red Sea, France sees the country as an important base to maintain its international influence. As early as 1932, France set up a military base in Djibouti. Djibouti, as a condition for its independence, signed a mutual defense treaty with France in 1977. Today, there are about 2,000 to 3,000 French soldiers in Djibouti, making it France’s biggest overseas naval base.

France wants to control Djibouti, but because of the tiny country’s strategic importance, other powers also harbor similar ambitions.

Ismaïl Omar Guelleh has been the country’s ruler since he became prime minister in 1999.

Aware of the geostrategic significance of his country, Guelleh has declared Djibouti as a safe channel to the Red Sea and invited other powers to maintain their military presence there.

The Sept. 11, 2001 attacks gave the United States an excuse to station troops in Djibouti, citing the country’s role in the fight against terrorism.

Currently, the size of American troops in Djibouti is twice that of the French army, and the US contribution of US$70 million for its military base in the country has become a major source of income for Djibouti.

In 2010, Japan set up its first overseas self-defense base in Djibouti, citing the need to address the problem of piracy from Somalia.

China also set up a military base in Djibouti in 2015, offering the country US$20 million a year, funding some of its infrastructure projects, and promising more investments through the One Belt, One Road initiative.

Even Italy has a small base in Djibouti, while Germany and Spain have set up theirs within the French base in the country. Indeed, Djibouti has become a sort of showroom of the Allied powers.

If you were to lodge in one of the five-star hotels in Djibouti, you would get to see all kinds of foreign soldiers. American troops have to abide by certain restrictions in their contacts with locals. France, however, allows its soldiers to interact with the locals freely.

For Guelleh, not only is he getting money for hosting foreign troops, he is also keeping a certain balance among the different powers stationed in his country, which helps him to consolidate his rule.

Behind the scenes, the US competes with France for more power in the region, while relations between China and Japan remain quite delicate.

Years ago, when China carried out military practices in Djibouti, the Americans protested, citing the alleged adverse effects of laser beams used by the Chinese soldiers.

In the past, Russia also sought to establish a military base there, but was refused, given the US opposition.

As such, it is no easy task balancing the interests of various foreign powers in Djibouti.

Ironically, the standard of living for the people there have continued to deteriorate since the country gained independence.

But the one who seems to benefit most from all these arrangements is Guelleh himself.