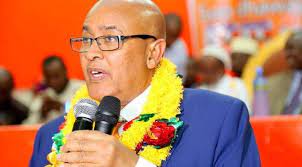 Waddani Party Chairman Mr. Abdirahman Mohamed Abdillahi (Irro) has announced that he will run for the post of Party Chairman at the party’s convention which will be held at the end of October this year.

Today (Friday) I officially announce my candidacy for the post of Chairman of the WADDANI Party.

Chairman Irro who founded the WADDANI party in 2021, according to the party’s website is expected to be re-elected as the party’s chairman, at the convention.