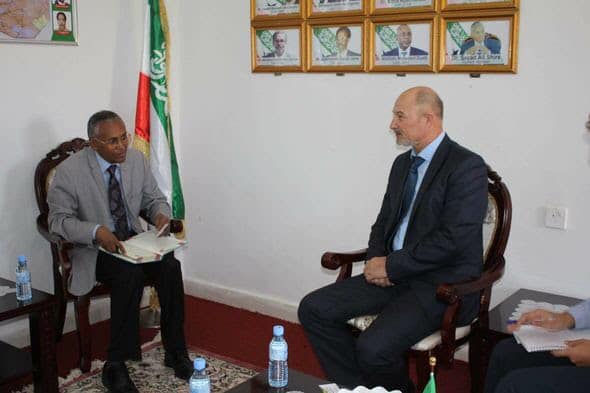 The Somalian authority in Villa Somalia has expressed its skepticism that the UAE might have played a key role in facilitating the recent trip that Somaliland president, H.E Musa Bihi Abdi, embarked on state visit to Guinea Conakry. The Villa Somalia reservations indicated that the United Arab Emirates is engaged in mineral exploration investment in Guinea and the investment that the UAE based DP World is doing it in Berbera port, Somalilland. Somalian authorities installed in Mogadishu also have the doubts that the unannounced visit of Somaliland president to Guinea may have something to do with covert meeting which is underway for Somaliland  and the Russian Gov where Russia is considering to recognize Somaliland in return for Somaliland to grant Russia a military facility at the port of Zeila. The Somalian president, Mohamed Abdilahi Farmajo met with Russian envoy in Mogadishu a couple of days ago and have conveyed his concern that the Russian gov is giving a particular consideration to the republic of Somaliland. The Villa Somalian authorities still remain confused on the state visit that Somaliland president paid to a courtesy call to Guinea, Conakry where he was treated with the red carpet.

The Somalian Foreign Minister, Mr. Ahmed Isse Awad declined to name the Arab country that his gov is suspected of having facilitated the Guinea visit by Somaliland President. Russia showed its keenness to set up a military base in the strategic port of Zeila. Russian high level delegation paid a courtesy call to Somaliland and held talks with its senior officials during Silamyo’s administration. Somalian authorities severed diplomatic ties with Guinea over Somaliland president surprise visit to Conakry.