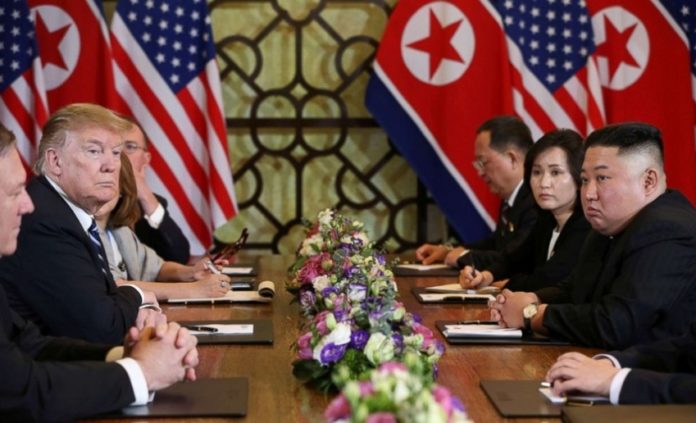 Donald Trump has become the first sitting US president to set foot in North Korea, after meeting Kim Jong-un in the area between the two Koreas.After posing for handshakes, Mr Trump met the North Korean leader for over an hour in the heavily fortified demilitarised zone (DMZ).

The two men agreed to set up teams to resume stalled nuclear talks. Their last summit broke down in February with no progress on denuclearisation in North Korea.In their third face-to-face encounter in just over a year, the two leaders met at the tense area that has divided the peninsula since hostilities in the Korea War ended in 1953.

Numerous previous US presidents have visited the armistice line, largely in a show of US support for the South. But Mr Trump changed the optics of the visit, eschewing binoculars and a bomber jacket for a business suit.

Negotiations between North Korea and the US have stalled after their second summit in early 2019 collapsed. Here’s an overview of a saga that has at times threatened nuclear war.

Why did North Korea develop nuclear weapons?
The Korean peninsula was divided after World War Two and the North developed an authoritarian form of government. Isolated globally, it saw nuclear weapons as its only deterrent against a world it believed was seeking to destroy it.

Could it carry out a nuclear attack?
Probably. North Korea has carried out six nuclear tests.

It claims, though this remains unverified, to have developed a nuclear bomb small enough to go on a long-range missile.

It also has a ballistic missile experts believe could reach the US.

How did talks begin?
After months of escalating mutual threats, in January 2018 Mr Kim said he was “open to dialogue”.

The two signed an agreement committing to the “complete denuclearisation of the Korean peninsula” but with no detail on what that meant.

Back to stalemate?
Since then though, there has been little progress. The US wants North Korea to unilaterally give up its nuclear weapons while Pyongyang wants a step-by-step approach to ease the crippling sanctions regime.

On 28 February 2019, the two met for second summit in Hanoi but talks broke down over North Korea demanding sanctions relief.

Both sides say they remain open to future talks but there’s no new summit scheduled.

Meanwhile, Kim Jong-un has also had meetings with Russian President Vladimir Putin and carried out new weapons tests widely seen as an attempt to increase pressure on the US.
In a meeting apparently arranged after Mr Trump invited Mr Kim on Twitter on Saturday, they shook hands across the demarcation line before Mr Trump briefly crossed into North Korean territory, a symbolic milestone.

“Good to see you again. I never expected to meet you at this place,” a smiley Mr Kim told Mr Trump through an interpreter in an encounter broadcast live on international television.

Mr Kim, looking relaxed, then crossed into South Korea, and alongside Mr Trump said: “I believe this is an expression of his willingness to eliminate all the unfortunate past and open a new future.”

They both walked to a building known as the Freedom House on the South Korean side, where they had private talks.

Speaking alongside Mr Trump in a rare statement to the press, Mr Kim said this was a symbol of their “excellent” relationship.

Calling their friendship “particularly great”, Mr Trump said it was a “great day for the world” and that he was “proud to step over the line” between the Koreas. He later said he had invited Mr Kim to visit the US.

Can it lead to something?
We were told to expect a two-minute handshake and a short meeting, but the two leaders were in there for just over an hour. Donald Trump has made history here. Kim Jong-un has come all the way from Pyongyang to meet him

This is extraordinary and is being billed as historic. But despite the personal chemistry between Mr Trump and Mr Kim, it does not mean they are any closer to nailing down the details of a deal.

Mr Trump told Mr Kim: “I’ll invite you to the White House right now.” Then came a reciprocal invitation from Mr Kim: “When the time is right, I’d like you to come to Pyongyang.”

These invitations allow people to see something is happening between these two leaders. However, unless the details of a deal are decided upon, who knows where we will be a year or two from now.

How are US-North Korea relations?
Negotiations with North Korea to try to convince it to abandon its controversial nuclear programme, reached a peak last year when Mr Trump and Mr Kim had a historic meeting in Singapore.

They both committed to the “complete denuclearisation” of the Korean peninsula, but without clarifying what that meant.

Media captionDonald Trump and Kim Jong-un: From enemies to frenemies
It was hoped their second meeting, in Hanoi in February, would make some concrete agreement about North Korea handing over its nuclear programme in exchange for some of the tight sanctions against it being lifted.

What to make of the Hanoi summit collapse?
Five things to know about the Korean truce zone
But those talks ended with no deal, as they failed to agree on the pace at which sanctions should be eased. Since then the negotiations have stalled, though Mr Kim and Mr Trump have exchanged letters recently.