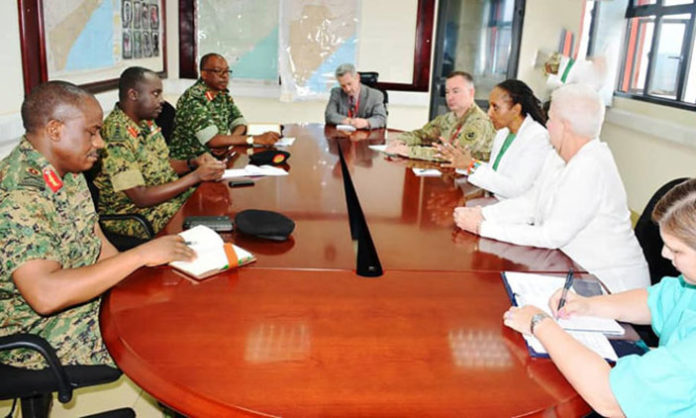 Chief of Defence Forces Gen. David Muhoozi  meeting with the US Deputy Assistant Secretary for East Africa, Amb. James Makila flanked by the US Ambassador to Uganda, Deborah Malac and other officials. Photos by Chris Kiwawulo
SECURITY

KAMPALA – The United States (US) Government has commended the Uganda Peoples’ Defence Forces (UPDF) for its immense contribution to peace and stability in Africa.

The US Deputy Assistant Secretary for East Africa, Amb. James Makila, expressed gratitude at UPDF’s outstanding contribution towards the African Mission in Somalia (AMISOM) since 2007.

The two leaders discussed the security situation in the region noting that the growing menace by Allied Democratic Forces (ADF) terrorists in Eastern DR Congo needs close monitoring, but welcomed the improved situation in Somalia and South Sudan.

On the situation in South Sudan, they expressed optimism at the positive development in the country pointing out that there is light at the end of the tunnel thanks to the Inter-Governmental Authority on Development (IGAD)-supported peace process.

Gen. Muhoozi reiterated UPDF’s commitment to peace operations and thanked the US government for its continued support.

The meeting was attended by US Ambassador to Uganda, Deborah Malac, and the UPDF Joint Chief of Staff Maj. Gen. Joseph Musanyufu and army spokesperson, Brig. Richard Karemire, among others.

The commendation comes a few days after Uganda Battle Group XXIII (UGBG XXIII) has been awarded medals and certificates for their distinguished contribution towards peace in war-torn Somalia.

The recent awarding ceremony followed UGBG XXIII’s end of one year tour of duty in Somalia that started on January 1, 2018, under the command of Col. Eliazari Zake Okolong.

The awards were given out at a colorful ceremony organised at the Uganda Contingent Headquarters in Mogadishu-Somalia.