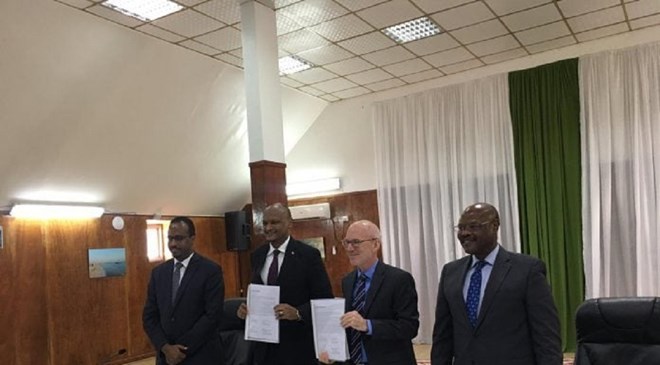 Somali government has signed a five-year framework of cooperation with the UN aimed at ‘achieving peace, stability, and prosperity for all Somalis’.

The UN Cooperation Framework signed in Mogadishu Tuesday between the Federal Government and the UN Assistance Mission in Somalia (UNSOM) outlines ways in which the United Nations intends to support government-owned and government-led priorities, a statement from UNSOM read in part.

UNSOM head James Swan hailed the framework noting it was crucial in supporting development efforts by the government of Somalia.

“Since the signing of the UN Strategic Framework in December 2017, Somalia has made remarkable progress in its journey towards consolidating peace and sustainable and inclusive development, with steadfast UN support,” Swan said at the signing ceremony.

The UNCF will replace a similar, previous agreement – the UN Strategic Framework (UNSF) – which expires at the end of this year.

Deputy Prime Minister Mahdi Gulaid who signed the agreement on behalf of the Federal Government welcomed the pact noting it was in conformity with the country’s National Development Plan.

“I welcome the UN’s clear commitment to supporting Somalia’s national development priorities through the direct alignment of the Cooperation Framework with the NDP-9, as well as the aid coordination architecture,” the deputy PM said.

The event was attended in-person and virtually by a number of government and UN officials, as well as representatives of the diplomatic community