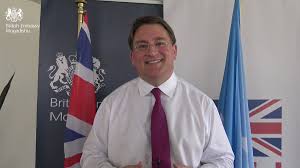 The UK government has maintained its position that has reaffirmed that it has not elevated Somaliland’s diplomatic status having the UK’s defense secretary and other senior officials paid a courtesy call to Somaliland.

The UK has asserted further it has allowed neighboring countries to mediate and also a priority will be given to the ongoing talks between Hargeisa & Mogadishu.

UK’s new ambassador to Somalia, Mr. Ben Fender has revealed that the political disagreement between Somalia and Somaliland has nothing to do with the UK and is a matter for Somalis to settle.

Mr. Fender has further added that the UK is keeping a watchful eyes on the proposed dialogue between the two sides and what the regional countries do about it.

The envoy has ascertained that the UK has not recognized Somaliland which is seeking to secede from Somalia and further said in a strong voice that it has not changed its position.

Mr. Ben has hailed the meetings between the two leaders and further added that the UK is determined to welcome any development made on this issue.

Rumors were speculated during a meeting between Ethiopia’s PM Mr. Abiy Ahmed with Somaliland leader, Musa Bihi which circulated that Ethiopia is brokering a deal between Hargeisa and Mogadishu.

There were unprecedented diplomatic efforts from Djibouti’s Head of State which gave a try to see the resumption of the stalled talks between the two regions but all attempts ended in vain.