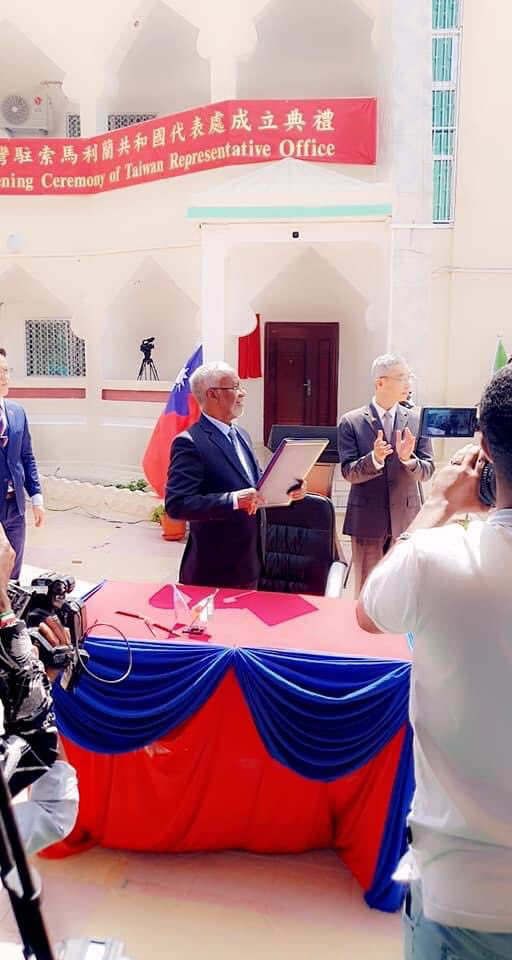 Taiwan has inaugurated a representative office in Somaliland.

This office will enhance diplomatic ties between Somaliland and Taiwan.

Taiwan’s representative to Somaliland said that Taiwan is seeking to promote cooperative relations with the African countries.

He reiterated that Taiwan & Somaliland will cooperate on agriculture, technology, education, and many other sectors including energy.

Lou said: ” The republic of Taiwan seeks to promote cooperative ties with African nations and spent its engagement through East Africa and had signed a bilateral agreement with government of the republic of Somaliland. Taiwan & Somaliland will work together in areas such as agriculture, healthcare, technology, education, security, energy, mining, trade, investment and fisheries. We are confident that the mutual beneficiary and the friendly ties between Taiwan and Somaliland will be further deepened.”

Somaliland FM Yasin Mohamoud Hiir Faraton said that he is pleased to co-host together with Taiwan FM Joseph Wu and the government of Taiwan to officially inaugurate Taiwan representative office in Somaliland.

He also confirmed that SL is planning to officially open its representative office in Taipei in the coming few weeks.

Faraton said: “On this historic occasion when the flag of Taiwan is being hoisted in Hargeisa, the republic of Somaliland. Therefore, I would like to congratulate you on behalf of our government and the people on the occasion of opening of your office. As we are officially launching inauguration of Taiwan’s office in Somaliland, I would like to announce that Somaliland office in Taipei is due to open in the next few weeks. Your excellencies, Taiwan and Somaliland share many common values and principles of democracy, superb political governance, vibrant free market economy, respect for fundamental human rights, transparency and open systems of government, freedom of association and expression including the free press.  The Somaliland-Taiwan ties is built on mutual cooperation. It aims to leverage and enhance on the respective strengths and comparative advantages for mutual benefits. While Somaliland has enormous untapped mineral resources including hydrocarbons, far-fledgling agricultural land for proper rearing of millions of livestock and rich fisheries and marine resources.

Taiwan provides an impressive and advantage and advanced technology and technical know how, highly skilled human capital and business infrastructure and unparalleled global network. Excellencies, we the republic of Somaliland hope and an endless desire that we will achieve practical cooperation with Taiwan that yields mutually tangible and beneficial outcomes and therefore, this time Taiwan and Somaliland should initiate efforts to strengthen relations in the areas of mutual common interest.”

It was on 1st of July when Somaliland & Taiwan reached a bilateral agreement as well as announced a new diplomatic ties between the two states.

These two non members of the UN have seen an unprecedented criticism and warnings from China and Somalia.

Somalia asserted it respects one China policy and denounces new diplomatic ties between Somaliland and Taiwan.