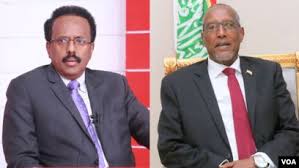 UN Special Envoy to Somalia on Thursday announced that talks underway between Somaliland and Somalia. James Swan has said that UN encourages the dialogue which is ongoing at a senior level. He added that both sides have shown a willingness to maintain communication and pursue further discussions. The UN top diplomat for Somalia has not offered further details and has not made clear the way the dialogue is conducted and the officials that are involved. Somaliland and Somalia leaders is believed to have bridged their gap once Farmajo and Bihi met in Addis Ababa which was brokered by Ethiopian PM Abiy Ahmed. The two leaders held first face-to-face meeting in Addis Ababa in February this year. Talks between the Somaliland and Somalia broke down after the incumbent leaders came to power in 2017.