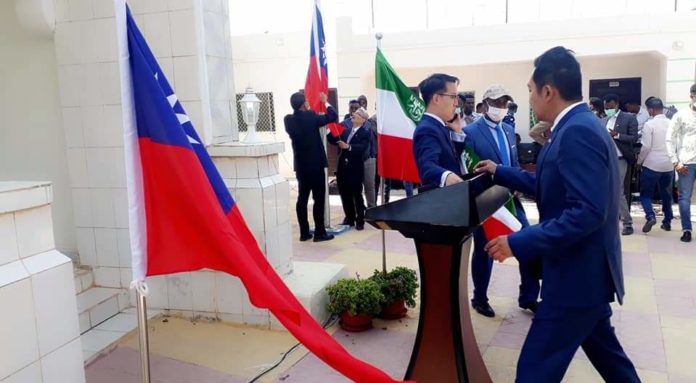 On Aug. 17, an editor employed by the Ministry of Foreign Affairs posted a notice on the ministry’s Facebook page announcing the opening of Taiwan’s new representative office in Somaliland. The editor wrote that the plaque by the door only said “Taiwan Representative Office,” with no “redundant words.”

This comment drew criticism from many people who took “redundant words” to mean the “Republic of China (ROC).” The editor only said half of what needs to be said, because the “ROC” label is not just redundant — it is a burden that impedes Taiwan’s efforts to reach out to the world.

In this day and age, only some Chinese Nationalist Party (KMT) members and supporters, and a few others who have muddled ideas about history still claim that the ROC’s territory includes the Chinese mainland and other areas within China’s “existing national boundaries.” Apart from them, most people dropped this idea long ago, so there is no need for this article to discuss or criticize it.

When people say that the ROC and the People’s Republic of China (PRC) are two different countries, it means at least that the ROC and PRC are two political entities, each of which has its own independent sovereignty, so they should not be confused with one another, nor can one of them take the place of the other.

As long as countries around the world abide by a restrictive “one China” policy, the “ROC” can hardly safeguard the independent sovereignty that Taiwan enjoys.

Some KMT supporters have reacted to the nation’s establishment of relations with Somaliland, asking: “What is the use of establishing relations with a country that is not recognized by the international community?”

However, by the same logic, they should ask themselves what there is to celebrate if any country establishes relations with a scarcely recognized country like the ROC. By the same measure, is the KMT not slapping itself in the face when it says that the ROC is a sovereign state and even that it should join the UN?

This mindset also reveals the KMT’s imperialistic attitude. In foreign relations, the more friends you have, the better. Especially considering Taiwan’s fragile international status and its bullying neighbor’s non-stop efforts to suppress it, how can Taiwanese afford to dismiss the few allies they have? Does anyone really still think of the ROC as the vast country it was before 1945, stretching as far west as the Panj River and as far north as the Sayan Mountains?

If Taiwanese think they should help Somaliland raise its international status to that of a normal country, should they not do the same for Taiwan? Only if they dump the baggage of the ROC and differentiate themselves from the idea of China can they create a future for Taiwan and Taiwanese.

The international community is growing more aware of Taiwan’s importance. This importance is based on Taiwan’s diversity, the robustness of its civil society and its spirit of national unity.

It is built upon the community of Taiwanese, rather than agreeing about the importance of this “country.”

That explains why, although countries around the world are strengthening their links with Taiwan, they are still not willing to recognize the ROC’s international status.

If Taiwanese want to make their robust community into a nation, they must draw up a constitution based on the Taiwanese community, and the country they found must be called “Taiwan.”