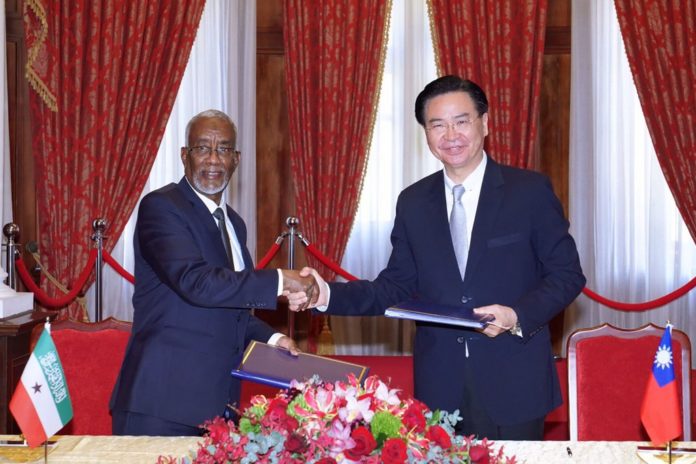 A report by local Somaliland media released on Monday (Aug. 3) states that the fledgling republic is considering formal recognition of Taiwan; the latter’s Ministry of Foreign Affairs (MOFA) has declined to comment.

On Monday, the Somaliland Chronicle reported that President Muse Bihi Abdi has directed “close confidants” to examine ways of bolstering Somaliland’s relations with Taiwan, including “the possibility of mutual recognition between Taiwan and Somaliland.” The newspaper cited sources saying on the condition of anonymity that the president has ordered an analysis of the TAIPEI Act, which was signed into law in the U.S. in March, and to present him with options and an assessment of “the pros and cons of unilateral recognition of Taiwan.”

What is of particular interest to Bihi is Section 3, Item 2 of the law, which states that the U.S. government should consider “increasing its economic, security, and diplomatic engagement with nations that have demonstrably strengthened, enhanced, or upgraded relations with Taiwan.” Bihi’s government may be particularly emboldened after the White House National Security Council (NSC) on July 10 posted a tweet lauding Taiwan for increasing its engagement in East Africa and included a link to a U.S. News & World Report article announcing the establishment of Taiwan-Somaliland ties.

In response to the news, MOFA spokesperson Joanne Ou (歐江安) on Monday said that the ministry does not comment on reports by the Somaliland media that have not cited their sources. She added that MOFA and its Somaliland counterpart will “continue to consult on establishing future bilateral cooperation plans based on the principle of mutual benefit and reciprocity and to promote the economy and people’s livelihoods.”

Since Somaliland and Taiwan established relations on July 1, China has attempted to pressure Somaliland into backing out of the new relationship. On Sunday (Aug. 2), the Chinese ambassador to Somalia, Qin Jian (覃儉) arrived in the Somaliland capital of Hargeisa for the third time this year, according to the Somaliland Chronicle.

It is not clear whether Qin’s latest visit is another bid to have Somaliland cut ties with Taiwan, but Bihi reportedly rejected a meeting with the ambassador.