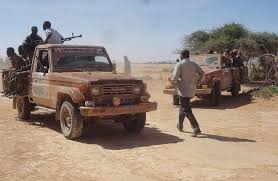 SL military forces clashed with Puntland army in the eastern part of Sanaag province on Wednesday morning with casualties on both sides.

Somaliland claims that fighting started when Puntland forces launched an offensive against the SL forces based in Yubbe area and then SL army repelled the raid.

Statement from SL national army command on 26th February alleges the Puntland state of Somalia for aggression and starting the raid.

Somaliland said it seized weapons and battle wagons belonging to Puntland forces, according to the press statement.

The press release from SL national army which was signed by SL military spokesman also said Puntland forces attempted to assassinate Lasqorey mayor on Tuesday on 25th of February, but he escaped unharmed.

The statement also said Somaliland was not prepared for war, but that they would defend themselves against any invasion, accusing Puntland regional state of instigating conflict in Sanaag province.

In a press release, Puntland state military claims it has repulsed SL raid near Yubbe village.

The press release further said Puntland army captured 50 SL prisoners and destroyed several battle wagons, a claim that is quite hard to verify.

Reports confirm that the fighting resulted in deaths of four soldiers on both sids but both sides have not commented on that.