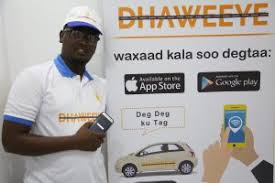 More than 2,000 young men in Somaliland are now behind the wheel earning a decent living with the new online taxi company, Dhaweye.

Abdullahi Ahmed Hassan, 32, is one of the 2,080 drivers signed up with Dhaweye in the past six months. He is driving a saloon car owned by the taxi company.

“You get passengers easily,” he said.“Now we have a market.”

Abdullahi, who was a taxi driver before, had been depending for two years on $50 monthly support from a relative after his car broke down and he could not repair it.

His family’s living standards have improved now that he has a predictable daily income of between $30 to $40 with Dhaweye. He is paying for the school fees of four of his brothers at $50 a month.  Smartphone users can call a taxi or find a shared ride in Hargeisa using the mobile app. Passengers are charged a fixed rate of $0.50 per 1 km.

Guled Ibrahim Ismail graduated two years ago from Hargeisa University and was working as a taxi driver. His income of $6-8 a day was not enough to maintain his car. He signed up with Dhaweye in May.

“Since I joined this taxi system, there have been changes in my life.I secure a good amount of money. The least I get daily is $30,” he said.

He is able to pay school fees for the children and basic daily needs for the family.

However, whilst the earnings are good, Guled said there are times the work is interrupted by internet outages.

Farah Ayanle Dayah-werar, spokesperson for Dhaweye, told Radio Ergo the company was founded by local and diaspora youth and aimed to reduce unemployment.  They place high importance on safety and security, which attracts customers.

“Goods that are forgotten by the customers inside private taxis used to be taken by the drivers, and women had no trust in the taxis at night. Personally, I used to make sure I gave my number to a relative when I got in a taxi at night for security,” Farah said.

Farah said Dhaweye is serving up to 10,000 customers a day using the app. On a normal day each driver gets about three or four rides.

Drivers pay a $10 a day commission to the company for use of one of its cars.  From next year, fees will also be introduced for drivers using their own cars.