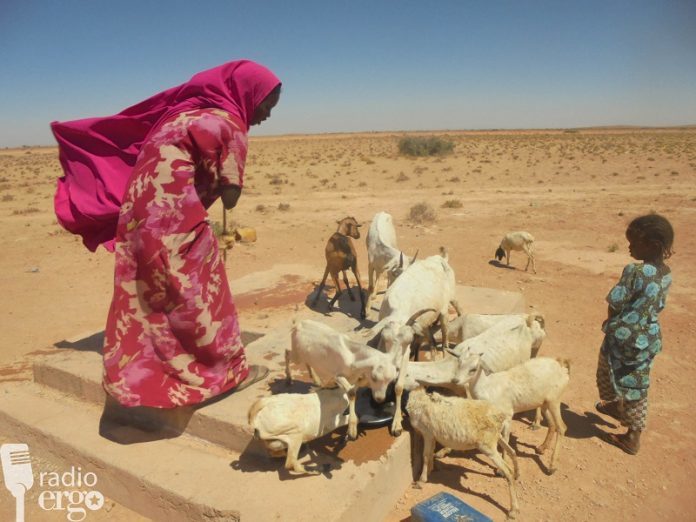 Mohamed Khalif Warsame is among hundred of pastoralists who have left their homes in Boo’ane, Somaliland’s Sool region, in search of pasture and water. This region is one of the worst affected by prolonged drought.

Radio Ergo’s local correspondent spoke with Warsame about his family’s struggles to keep hope alive. Warsame was asked first to explain why he is on the move.

Mohamed Khalif Warsame: I migrated from a village called Harwanaag, East of Boo’ane.  I migrated because I am a pastoralist and we have not had rains for some time now. I migrated to Nakadheey village and we are still on the move. We don’t have any other problem except that of the rains and that is why we are moving around.

Radio Ergo: What challenges did you face in Harwanaag?

Mohamed Khalif Warsame: A busy well, powered by a water pump that some days didn’t work because of lack of fuel, was the only source of water for the village.

This only well in the village stopped functioning after the water pump developed mechanical problems.

We are among those who lost some of their livestock to the previous drought and we are still reeling from that loss. But there are different people here: there are those from low-income families who have been left behind here because they couldn’t afford to move.

As it is, we are trekking on foot with our livestock, we spent last night on the road and we are doing the same tonight. It is not easy but we are forced to do it. If we could afford it, we would have rented a vehicle to transport our belongings and the livestock.

Radio Ergo: How many kilometers is the place you are heading to?

Mohamed Khalif Warsame: I can estimate it is up to 80 km, if not further.

Radio Ergo: How did you manage to move your family this distance?

Mohamed Khalif Warsame: It was God’s plan for us as livestock keepers. When the rains delayed and we heard that there was a village where rains had arrived, we rented a vehicle to transport those who couldn’t walk.

Radio Ergo: How much did you pay to rent the vehicle?

Mohamed Khalif Warsame: The owner was an acquaintance and I told him that I would pay for the fuel and give him the rental money later on when I sell some of my livestock.

Radio Ergo: How many people have migrated from Harwanaag as far as you know?

Mohamed Khalif Warsame: I can’t tell you exactly but I would estimate between 200 to 300 people.

Radio Ergo:  Why did they migrate to Nakadheey area?

Mohamed Khalif Warsame: The area received some rain and as you know the people here were so desperate for rain that is why we moved. However, the population influx might come with its dangers such as an outbreak of diseases.

Radio Ergo: Will the livestock get enough grazing in Nakadheey?

Mohamed Khalif Warsame: No, there is not enough to feed the livestock and if we don’t receive the rains soon, then the situation would be dire.