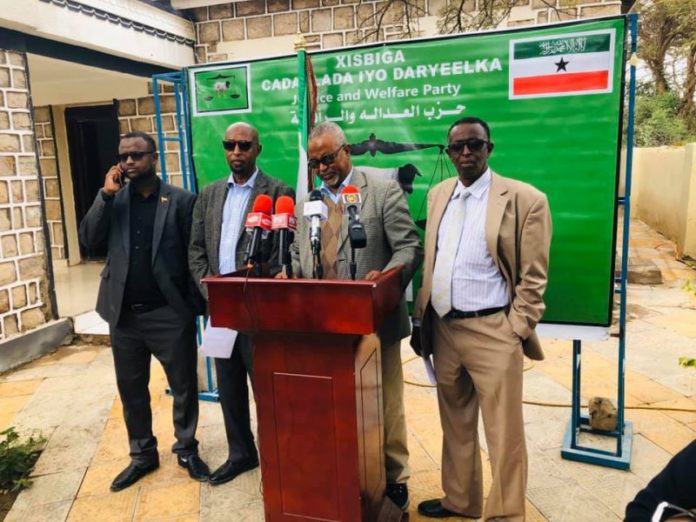 Somaliland leading opposition parties have formed a joint committee to resolve the political dispute and spearhead the opposition’s agenda.

Ucid and Wadani parties jointly held a press conference at the former’s headquarters in the capital Hargeisa, where they named a 22 member committee that will resolve key issues affecting the country.

The committee will comprise of two levels, one led by the top leaders of each party and another comprising of the executive committees.

The two parties sai they will deliberate, discuss and proposes the way forward after opposition leaders were arrested and detained in Mandera maximum prison, and the six-member disputed electoral commission was sworn in today.

The parties accused President Muse Bihi and The ruling party of refusing to have a dialogue with the opposition, to solve the political crisis at Hand.

Isamel Adan Osman, an executive committee of Wadani who spoke on behalf of the opposition parties condemned the arrest of key opposition party leaders. He said this has not happened before.

The executive committee of Wadani party added that the government of the day is breaking the law.

He accused the judiciary, saying it is not independent.

The opposition parties’ joint committee was formed after a closed-door meeting between Wadani and Ucid party leaders; among them Prof Ahmed Abdi Muse Abyan and Dr Abdirahman Mohammed Inro of Ucid and Wadani parties respectively.