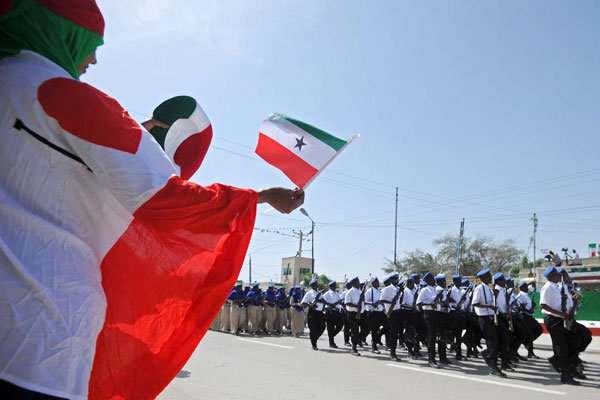 In Hargeisa, the capital of Somaliland, is a monument with a jet fighter bearing Somalia flags. The MiG aircraft is said to have been used to target guerrillas as Somalia President Siad Barre massacred perceived opponents 31 years ago.

Now, Muse Bihi Abdi, a retired Somalia military pilot and current President of the breakaway region, is leading efforts to have Somaliland recognised as an independent state.

This week, Somaliland Foreign Affairs ministry said it would push ahead with efforts for recognition, whether Somalia likes it or not.

“Somaliland government agreed to engage with the government of Somalia in the service of broader regional cooperation and mutual understanding but we will not be held hostage by its intransigence,” ministry spokesman Yasin Hagi Mohamed said.

“We call on the international community to address the issue of Somaliland’s recognition.”

Mogadishu has been at loggerheads with countries perceived to be rolling out the red carpet for Somaliland leaders.

Last month, Kenya’s Foreign Affairs PS Macharia Kamau was accused of violating the territorial integrity of Somalia when he hosted Mohamed in Nairobi.

However, Nairobi did not and has not endorsed Hargeisa’s independence bid and Kamau earlier told the Sunday Nation that Kenya supports “federalism within the larger Somalia”.

Mogadishu said Guinea accorded presidential protocol privileges “to a leader of a separatist movement and violated the unity of the Somali people”.

Just days ago, Farmaajo formed a committee for “reconciliation and dialogue” with Somaliland.

It immediately raised a storm. Somaliland said the move was a “disingenuous attempt to paper over the Somalia government’s policy of aggression and punishment directly targeting Somaliland people, simply for seeking to preserve the independence we suffered so hard to achieve”.

Hargeisa says while reconciliation is needed for a country that has suffered the vagaries of civil war, members of the team include Barre allies.

To Hargeisa, these are remnants of eyes and legs of a dictator loathed in the breakaway region. Somaliland says it cannot negotiate with “war criminals”.

Somaliland’s resident representative in the UK and the Commonwealth Ayan Mahamoud argued that the team includes officials from Somaliland, violating the concept that the talks would be between Somalia and Somaliland.

“The talks between Somaliland and Somalia facilitated by Turkey failed two years ago because Somalia included people from Somaliland in the delegation,” she said.

“Farmaajo is doing the same. He announced his committee including two from Somaliland. This is paying lip service to international partners.”

Ideally, Mogadishu wants the six federal states to toe its line. But each of the states – Jubbaland, South West, Galmudug, Hirshabelle, Puntland and Somaliland – have a different stand on federalism.

Jubbaland and Puntland want complete autonomy within Somalia, while others like Galmudug and Hirshabelle insist on a centralised form.

Somaliland is a special case, argued one Somali diplomat, seeking to remain anonymous as he works for the presidency in Mogadishu.

It declared independence after the overthrow of Barre in 1991.

It is not internationally recognised, but has a functioning government, departments, police, currency and routinely takes part in global forums.

Yet its path for recognition could be problematic, said Abdiwab Abdisamad, a commentator on the Horn of Africa.

“South Sudan negotiated with Sudan to get independence. Similarly, Eritrea negotiated with Ethiopia after a long war. Somaliland should use the same procedure,” he said.

Unfortunately, the African Union has no appetite for new nations.

“Independence could follow the path of South Sudan, where tribes – in this case clans – fight out for a stake. Isaaq is the largest clan in Somaliland. Others, including Dhulbahante, Warsangali, Guthubiirsi and Iyo Issa – collectively make up about 45 per cent of the 3.5 million people,” he said.