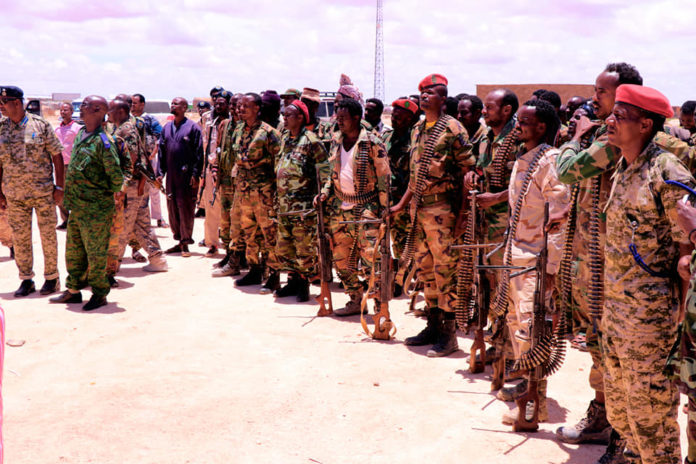 Somaliland military on Sunday launched of a new disarmament drive aimed at disarming clans that have engaged inter-clan skirmishes in the troubled areas in Sanaag province. Locals have taken to the streets to oppose against the government decision to confiscate people who are not authorized to carry weapons. Sanaag regional authority issued a directive which is aimed to seize illegal weapons from the residents and the ban was enforced by Somaliland’s armed forces. The peaceful demonstrations were held yesterday in Hulul, Kalboc, El-lehelay, Bohol, Siiga-Dher, Laasa-Dabare villages. The regular military forces deployed in the region have seized 16 light weapons including guns and two battle wagons. Youngsters who have taken to streets in the troubled villages have burnt tires chanting slogans against the disarmament drive that the military conducted in the area. The military forces have conducted door to door search over cache of weapons hidden in the residential places. District authorities have informed the locals that they have to hand over unauthorized weapons. The objective behind the government drive to disarm the militias and locals who have access to authorized weapons is meant to extend the safety zone beyond troubled areas were the skirmishes of inter-clan became the norm. The government recently dispatched a team of ministers to settle the protracted clashes that happen in Sanaag region. The last clashes took place in Fadhi-Gaab which compelled Erigavo-Burao road construction workers to halt the building due to lack of security. Somaliland government reiterated that it is ready to implement the rule of law in the region. No civilians will be permitted to carry arms throughout the entire region and weapons will only be carried by regular forces. The drive is also aimed at combating arms proliferation in the restive region of Sanaag province.