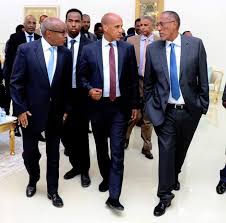 JIGJIGA– The president of Ethiopia’s Somali State, Mr. Mustafe Mohamud Omar was in attendance of high level meeting between officials in charge of Somaliland’s security agencies and their counterparts in Somali regional state in Jigjiga. Issues that were top of the agenda boost the security collaboration, tackling of illegal weapons, fight against contraband trade and ways to crack down against Ethiopian nationals who use Somaliland coast as a gateway to be smuggled into Yemen and Saudi Arabai. Deputy security and justice development, Mr. Abdilahi Mohamed Abdi briefed the media on issues discussed during the high level meeting. Mr. Abdilahi said that the essence of conference was to discus ways to bolster security where top security officials from Somaliland were in attendance. He said that the two sides discussed means to reinforce security between Somaliland and Ethiopia’s Somali State. The focus of the discussion centered against launching a joint combat against illegal arms trade and immigration. The two sides have reached a common understanding on consolidating peace and stability. They also agreed that those who are against the governments in both sides should not aided or supported. They also saw eye to eye against the number one enemy is to fight against extremist organizations the likes of Al Shabab.