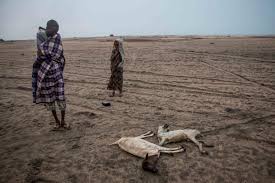 The aid agency Oxfam published a report this week warning that up to 1.7 million people in Somaliland are in critical need of humanitarian assistance.  This number has increased by hundreds of thousands in recent months. Radio Ergo correspondent Ilyas Abdi asked OXFAM’s head of communications in Somalia, Abdiaziz Ali Adani,to outline their findings.

Abdiaziz: In the report, we stated that an estimated 1.7 million people face drought conditions currently and at the same time need urgent assistance. We also noted in the report that the communal water resources had dried up. I travelled (two weeks ago) through areas in eastern Somaliland and in all those areas I visited, I saw that there were severe water shortages; people had no water and food. Therefore there are those challenges.

Ilyas: What is the number of IDPs according to your report?

Abdiaziz:  In the report, there was information indicating that an estimated 4.9 million people in Somalia face food insecurity because of drought and 2.6 million of those people are IDPs.

Ilyas: Specifically, what did you observe in the areas where you travelled?

Abdiaziz: People have no tanks to store water, there are small water reservoirs and these dry up within 3 to 4 months. Water is the most crucial thing in life for survival. Without water, they cannot cook and if they miss clean water, people are likely to look for water and drink from stagnant surface water which is not safe for drinking and could lead to outbreaks of diseases, as has been happening recently. There is no pasture for the livestock; the grazing lands have no grass.

Ilyas: Those people you visited, what are they surviving on,?

Abdiaziz: In an area called Karasharkaon the outskirts of Garadalocality I was told that IDPs rely on a nearby water catchment whose water is not clean. Sowe visited the site and the water was not clean but that was the only source of water they had.

Ilyas: Which areas are affected by drought in Puntland and Somaliland?

Abdiaziz: There are many areas. For instance, all those areas along the coast in Puntland and Somaliland are hit by severe drought. In Somaliland, the drought has affected places in Togdher, Sool, Sanaag, and parts of Awdal region. As you are aware, some places were previously hit by the cyclone that caused damage so if this time around they do not get sufficient rainfall, there is a likelihood of their condition getting worse.  Most importantly, this is not the first time these areas are affected by drought. They have been undergoing the same situation for the last two years. People are getting weaker and more vulnerable if not given urgent assistance.

Ilyas: What challenges are the aid agencies facing?

Abdiaziz: Out of the pledges made by the donors, only 6.4% intended for Somali people were received meaning close to 94% of the appeal has not been responded to. We also noted in the report a call on donors to respond urgently.