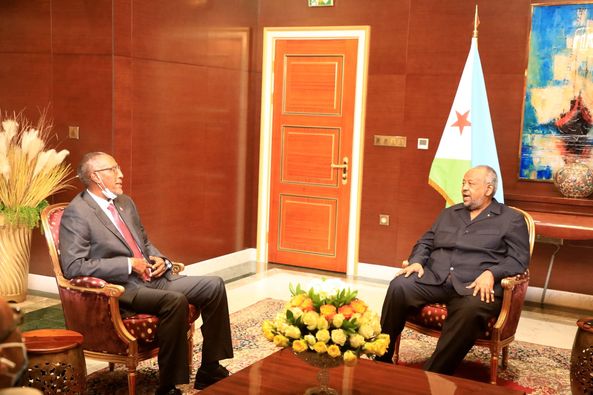 The two presidents of the Republic of Somaliland and Djibouti, their excellencies Musa Bihi Abdi and Ismail Omar Ghuelleh, held a lengthy meeting, Wednesday, in Djibouti to renew collaboration on mutual areas of concern.

The meeting between the two presidents follows an unannounced, impromptu visit which President Bihi made to Djibouti earlier today.

Djibouti as an internationally recognized country, although the nearest to kin to Somaliland on many fronts including common descent and cultural similarities, has failed to convert this to the advantage of the two countries.

The bulk of the Somaliland population believes that – for reasons only be known to itself – Djibouti preferred Mogadishu to Hargeisa although, again, the latter had played a selfless role in the former’s long, arduous road to its 1977 independence.

Djibouti is one of the Somali areas whose quest led Somaliland to throw away its diplomatically recognized sovereignty to the winds in 1960 to thoughtlessly merge with Italian Somalia in anticipation of a greater Somali state – a move it regretted ever since.

Besides Mohamed Somali, Minister Mohamoud Ali Youssuf of Foreign Affairs participated in the meeting between the two Presidents, on the Djibouti side where Professor Yassin Mohamoud Hiir ‘Faratoon’ accompanied President Bihi.

The two ambassadors in each other’s country, Abdifattah Ahmed Saeed of Somaliland to Djibouti, and Hussein Omar Kawaliye, representing Djibouti in Somaliland, also attended the meeting.

The two sides had been exchanging visits in recent months but the progress made in relations has not been eye-catching to date.

The Djibouti visit comes at the tail-end of a packed, diplomatically fruitful week for a Somaliland which appears to have commanded the genuine attention of a hitherto insouciant, propaganda-flooded international community.