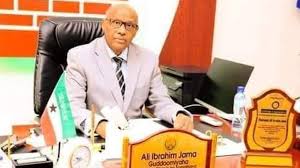 The Governor of the Central Bank Mr. Ali Ibrahim Baghdadi has cautioned the merchant community not to do transactions unscrupulously in any monetary exchange rates other than that given by the Central Bank.

The Governor further warned that the unscrupulous traders who inflate the rate in their business transactions hence flout the guidelines set would have legal steps taken against them.

The Governor gave the stern warnings during a function the bank held for its employees over the week.

He noted that the bank had engaged the major stakeholders in the forex sector hence stabilized the rate in collaboration since 11th August 2019.

In the collaboration, the general consensus and agreements amongst the stakeholders was for the bank to regulate the buying and selling rate, said, Governor.

He further noted that they consulted together on a daily basis by 8:30 a.m. every morning and hence the bank releases the rate at 9:00 a.m.

The Governor noted that the major banks, thus the main stakeholders, adhered to the rate and by thus served the public through the set forex guides, on a daily basis routine.

Mr. Ali Baghdadi said that he visited a major local supermarket and was taken aback when the attendants said that the exchange rate of the dollar to the local currency was 8:700 SL Shs, whereby it was supposed to be 8:670 SL Shs, it was thus inflated by 100 shillings.

On the same breath, the governor gave a stern warning that wayward traders will face the wrath of the law when they deviate from the given guidelines on the exchange rates.