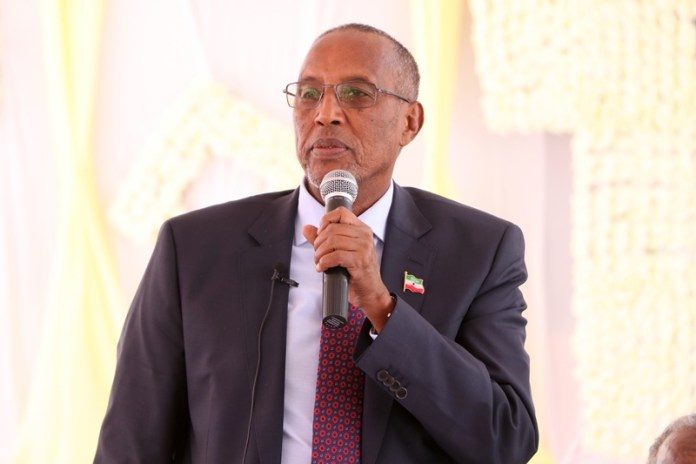 Before I look at the budget in detail, I must say a word or two about the definition of budget. Budget is a financial plan that articulates the objectives and goals of a government for a certain period usually a year. In other words, it is the annual economic strategy but there are occasions when planning, instead of helpful, becomes harmful. Budgeting is difficult and daunting process of estimating both revenue and expenses during a specific period. A national budget is the budget of a country. The government gets money from taxes and fees, and spends it on many things like national defense, infrastructure, grants for research, Education, Social agendas such as Social security and Medicare.

Somaliland Budget 2019 revenue (central Government) is 182,075,482 USD. With such ever increasing budget, the picture is rosy. A government allocates more 32% of its revenue in Security while Governance and Economic sectors were allocated for 28.4% and 17.86% respectively; Social services were allocated for only 16.34% while the crucial sectors of infrastructure and environment are given least priority by earmarking 3.31% and 1.32% Maybe this is partially because GIZ and SDF are investing this sector. Despite the increase of revenue and change of command for this crucial Ministry of Finance, still the 2018-2019 budget allocation per sectors is astonishingly stagnant! The allocation formula puts the country at a disadvantageous position if the budget allocation is implemented without budget priorities and lucid budget policy that is aligned with the National Development Plan II, thus it will be a government that never wants to out to be a fully and effective working nation.

The best practice for budget measuring contains no more than the following 8 steps: Pre-budget Statement, Executive Budget Proposal, Enacted Budget, Citizens Budget, in year report, mid- year review, year-end reports as well as Auditors Report.  However, to the dismay of many citizens hardly three of the above-mentioned items exist; even though those are shrouded with secrecy while public participation is close to nil and with little details and unfortunately at least five of these eight steps does not exist, at all.

On 22nd  December 2018, the Somaliland Minister of Finance an acclaimed economist presented a delayed 2018 National budget to the House of Representatives. Therefore, in this article by using budget data from the 2019 Financial Year, I will make a number of analysis regarding the budget source of revenues, allocations, mismatches, and budget priorities. This will allow us to understand how the 2018 Government Budget allocations differ from the National Development Plan II and realities on the ground.

Somaliland Budget 2019 which has been approved by House of Representatives unanimously on 29 December 2018 barely a week after the Finance Minister tabled it. No more than 20MPS participated mostly in support but is not addressing any current challenges of the nation in a meaningful way. This is neither developmental nor social services budget. In addition to that, it is not based on National Development Plan II. Below table explain the source of revenue for the 2018 National budget.

This budget shows clear gaps of not only tax collection at large but also the large discrepancy of income lines, the dividen of Berbera Port and 10% of income tax is not included for the second year in a row. The overall income contains $182 Million: Customs account largest amount 70% while Inland Revenue contributes only 23% and the rest contain 7%.

Telecommunication and Financial sectors seem to the least under taxed and have limited contribution of overall income despite handling at least Billion dollar.

Despite forecasted 182 Million dollar, the allocation for the Education sector is little more than $ 15,354,979.79 which is roughly 8.4%, which is far below the allocation of Kenya which allocated 26.2% of its revenue to education sector even though 80+ % of its children go to school according to the Somaliland’s NDPII only little more than 44% of Somaliland pupils attend schools which is not only shocking but tremendous calamity whose impact will be felt for the decades to come. In other sectors, Health, for instance, is not any better with allocation of only $7.66 Million which is approximately 4% of the Total Budget. This shows not only lack of commitment to do better on the health sector of which Somaliland is far below the average sub-Saharan Health indicators; Maternal mortality is 1% Somaliland, relative to 0.7% in Ethiopia, and above the 0.7% average in the sub-Saharan Africa while South Sudan is: 0.9% for under 5Mortality while (children) is 9% for Somaliland, 7.1% Ethiopia, 9.7% Sub-Sahara Africa, 9.3% South Sudan. But cruelty and heartlessness of our leaders and decision makers, who are joyful while their populace is dying lack of Health infrastructure investment. Elites in the establishment as well as intelligentsia are partially responsible for this mess because it never become an issue of great importance or prodigious weight.

A country which 75% of its food basket are imported, land degradation is getting worse. Hardly a year goes without draughts, lacks sufficient clean water for at least half of its population, only has 800km tarmac road, little more than half of its children are without schools, illiteracy is far higher than its neighbor (Ethiopia) has one of the smallest GDP ($2.5 Billion) in the Globe coupled with the lowest rank of per capita $675 (as per GDP report 2012-2017) in the world; high income disparity between urban and rural population yet this budget is not responsive to these and many other aligned situations in addition to that, it is not offering any meaningful alternative routes for practical solutions for the contemporary issues facing the country but contrary to that, it will be a continuation of the status qua for yet another year and the future prospect is far from certain if not, very bleak.

The Country acutely requires tax reform. And such tax reforms should focus widening tax base, discouraging needless tax exemptions, sealing tax leakage as well as optimum effort must be directed to the restructuring of tax collection mechanisms and implementing the best practices. Every effort must made to build the capacity and capability of Ministry of Finance and its staff. Any law loophole must be addressed earnestly, salary need to be re-evaluated, both hygiene and positive valences must be in place. These baby steps will dramatically increase on the revenue as there is a room for improvement. As our GDP has been estimated around 2.5 Billion Dollars by taxing only 15% can double  revenue from current 182 Million to 375 Million. By taking these bold steps it will enable the government to heavily invest social services as well as the infrastructure which will continue to have an enormous impact to development of our country for now and in the future.

Of the approximately 15 Million USD increase, the Lions share went to Security and Governance. At least 62% went to Governance and Security while 19.5% has been awarded to Social Services, additional 14% have been granted to the Economic Sector whilst paramount sectors of Environment and Infrastructure have been negligently allocated 1.38% and 2.2%.

The current budget has generously allocated the presidency more than its share. The Presidency which includes: Presidential guard, office of the President and the Vice has more budget than; 11 paramount Ministries and three incomparable institutions which includes: Ministry of Justice 0.53%, National Planning 0.67% , Commerce and Industry 0.97%, Energy & Minerals 0.44%, Agriculture 0.99%, Sports  0.80%, Environment 00.79%, Water  0.98%, Investment  0.26%, Labor and Social Affairs  0.58%, Constitution and parliamentary affairs 0.37%, Auditor General 0.64%, Attorney General  0.45% and the Tender Board Committee 0.15%.

Top 10 institutions are allocated 69% of total Budget while 10 least ranked are earmarked only 1.84%. it is not surprising that the much-touted Investment Ministry has been billed only 0.26%.

Ostensibly, the government prefers propaganda than the fundamental genuine and authentic issues related to livelihood and survival of the future generations. Take for instance, Ministry of Information has been allocated the huge amount of $451, 8456.848 while the neglected Foreign Ministry which couples our diplomatic offices abroad, the cost of lobby groups that greatly help us and our miss-treated recognition has been allocated little more than 3.4 million dollars (3,457,708.33) isn’t that astonishing. To make, matters worse, the information Ministry has more budget than the combined Ministry of Livestock & Fishery and Envoirenment. The National Development Plan Slogan: “A state with a healthy and well managed environment that is productive and sustainable” was not only hot air but only it was a public relation gimmick in order to betray, deceive and hoodwink the population at large.

In other words, the allocation of huge resources for a non-productive such as Information Ministry while at same time, abandoning a crucial productive Ministries shows the mismatch of plans and budgets. It is unambiguous that there is not an only little consultation for the budget crafting plenary meetings but also little relation of budgets and the much-taunted National Development II. Frankly speaking we have upside down priorities!

Anything I appreciate? Yes, plenty of issues including but not limited, the completion of Burao-Erigavo Road which is set to be completed this year; construction of Sub-service Dams Country Wide, heavily investing the Quality control equipment’s which will enable to monitor the quality of Food, Drugs and beverages for the two most important entry points, the construction of Maid jetty which  will be accessed by Boats transporting 100 Tons of goods, it will cater the need of entire population of Sanaag 544,000 according to the UNFPA population survey this will have a profound effects  income of fishery in a way reduces poverty also augments the movement of goods and subsequently spurs economic activity in the entire Sanaag region.

Finally, Somaliland Budget is one of the most crucial or important document that Government produces annually. It takes preparation of months yet hardly it attracts any attention either from Academia, Civil Society, Opposition Parties and Media and rubber stamp House of Representatives hardly debated. Hard it been debated intensely, winners could have been not only Citizens but Government, Opposition, Academics and the entire Country could have been the winner but was another avenue we failed to endeavor.