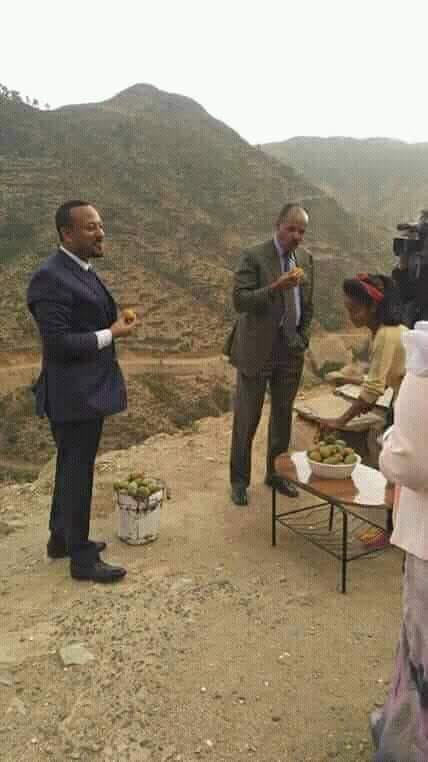 Somaliland welcomes the waves of political change taking place in the Horn of Africa, the democratization of Ethiopia spearheaded by Dr Abiy Ahmed and the normalization of relation between Ethiopia and Eritrea, and also the easing of the alleged accusation of Somalia about Eritrea supporting Al-shabaab terrorist .

For a long time and centuries hate and mistrust where put among  the people of the Horn by  the European colonizers, religion leaders, feudal  and dictators , which have caused killing, atrocities and death of thousands of innocent people among the people the Horn. The only reason why hate and mistrust was put among the people of the Horn was to prolong rule and to held on to power at the  expense of killing and destruction of innocent people.
The main reason why the  Somaliland people joined Somalia and scarified their nationhood was driven by the Pan African nationalism movement in 1950s and 1960s against the European colonizers to unite the Somali ethnic separated  by the boundaries created by Italy, England and France. Somaliland  was the only country in the world which had rejected the boundaries created and put between the Somali people by the European colonizers, but  instead    joined Somalia on July 1, 1960,  five days after Somaliland gained its independence from  England on  June 26, 1960. No Arab country or African country  dared or even digested  the thought of uniting with its neighboring Arab or African country days after gaining independence.
The Somaliland people  joined Somalia in search of a  dubious  Great Somalia. In return the Somaliland people were cheated off their independence and nationhood, instead of fair power sharing Somalia leaders took most important government positions, like presidency and  premiership, late  Aden Abdule Osman was elected president and Abdirashid Sharmarke was nominated prime minister both from Somalia , where  non essential cabinet positions were given to Somaliland leaders. Late Muhamad Haji Ibrahim Egal who was leading the Somaliland delegation was nominated defense minister of Somalia, fake position controlled by Italy trained Somalia officer,  while his colleagues took non important positions.
After a widespread of  distortion, discrimination and injustice against  Somaliland representatives , it led to aborted military coup against Somalia by Somaliland Military officers in 1961, which was the beginning of Somaliland people struggle to reclaim the lost nationhood and independence on June 26, 1960.
Beginning of 1980s until 1991 Somalia late dictator Siad Barre executed and buried in mass graves as many as 200, 000 men, women and children in retaliation against the SNM, Somali National Movement, formed by elite Somaliland military officers, including current Somaliland president Muse Bihi to topple the dictatorial regime of Barre. Which led to the ouster of Siad military regime and the  declaration and re-claim of  Somaliland independence on May 18, 1991 lost in 1960 for a dubious Great Somalia.
The Somaliland people were  killed and massacred by Somalia government of Siad Barre, in the name of  “The sovereignty and the territorial Integrity of Somalia  is sacred”. Today the people of Somaliland are saying ” The sovereignty and the territorial Integrity of Somaliland is sacred”
Again today the nephew of Siad Barre, Farmajo, Somalia president is beating the drums of same slogan “The sovereignty and the territorial Integrity of Somalia  is sacred”  with the help of Qatar and  Turkish government training, re-building his military infrastructure and  personnel to wage a proxy/clan war against Somaliland from Puntland, near Somaliland/Somalia border Tukaraq to sabotage the peace, and the  DP World, Somaliland and Ethiopia joint agreement to develop and invest in the  Barbara Port  of Somaliland located  in an strategic location of Gulf of Aden,  which Turkey is eyeing to take control  like Moqdisho port and Moqdisho  Air port to limit the access of the Arab world to the Gulf of Aden, Red Sea and Horn of  Africa.
The current Somali State ruler of Ethiopia , Mustafa Omar, is also trying to follow  his predecessor, Abdi Illey by playing clan card and sent  Liyu Police to Sool, Somaliland in the name of stopping clan militia war  in  Sool , Somaliland  without consulting or asking permission the Somaliland Authority before crossing the border. Again Mustafa invited clan elders of the warring clan militia to Jigjiga because of clan affiliation , instead of supporting  the peace and the mediation which Somaliland  authority and clan elders have already extended to the warring clan militia and their elders.
The Somaliland people and authority have never intervened or  crossed the Ethiopian border illegally when Abdi Illey was slaughtering Somaliland clans men in Jama Dubad/Hawd and Reserve Area respecting the integrity of the Ethiopian border.
The Somaliland people’s freedom, democracy  and independence didn’t came on a silver plate, but  came with heavy price of sacrifice and bloodshed, like the people of Ethiopia and Eritrea paid heavy price and sacrifice for their Freedom and Independence against the colonizers, Feudal and dictators.
Again Somaliland  welcomes the good relation established between  Ethiopia, Eritrea and Somalia. But  sincerely asks  Dr Abiy, Ethiopian PM  and president Isaias of Eritrea to respect the wishes and territorial integrity of Somaliland until the UN or AU solves the separation of the two countries to their original status before the union.
Mohamud Aden Samatar