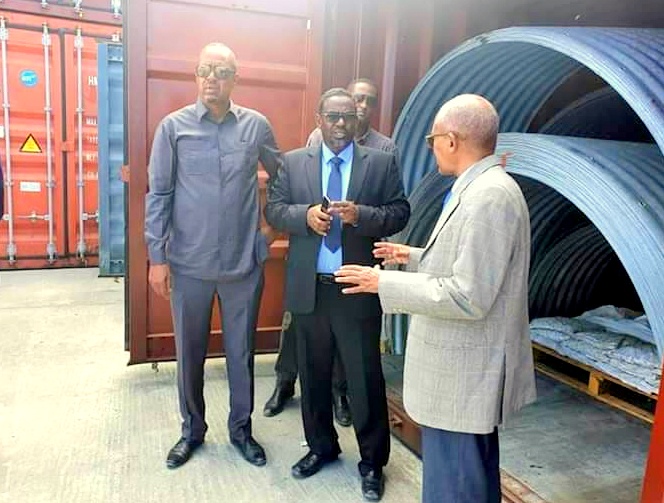 Erigavo-Burao to be constructed aptly with culverts for transverse drainage

While disclosing the fact the Transport and Roads Development Minister Hon. Abdillahi Abokor Osman said that there were 163 seasonal rivers or streams that dotted the Erigavo-Burao road that needs proper culverts to tame the water currents.

The minister revealed that the culvert facilities worth 983,000 US Dollars were purchased from South Africa hence more containers were on their way.

Hon. Sa’ad acknowledged the need of the facilities in the roads constructions noting that their imperativeness would help save the constructed roads from un-due perils due to flash floods.

The Port Manager who was at hand to conduct the tour of the cabinet ministers at the harbor pledged that they would expedite expreessly the handling of the forthcoming containers once they hit the port.

The duo who was accompanied by the Education director-general.

Earlier on they inspected the site of the ongoing construction of the new port being put up near the old one.