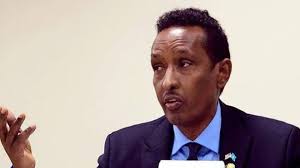 The FM of Somalian authority in Villa Somalia has convened foreign envoys based in Mogadishu on Saturday held at Adden Adde airport.

Mr. Ahmed Isse Awad has informed foreign ambassadors that Somalian authority stance on Somaliland is that it is part and parcel of Somalia’s territorial integrity.

He also apprised of them that the countries they represent cannot offer an invitation to Somaliland president and treating him the red carpet adding that Somalian leader is entitled to receive the warm reception.

The FM further revealed that Somalian authority in Villa Somalia would like the progress that Somaliland is taking in the right direction but this is something that he cannot change or do something about it.

He stated that since Somalia recognizes Somaliland as part and parcel of Somalian sovereignty then those who violate it would be seen that it has disrespected the territorial integrity and unity of Somalia.

The Somalian FM has further accused of foreign countries which are engaged to undermine Somalian unity but sent a stern warning that they must stop meddling the internal affairs of Somalia.

The FM also spoke with foreign envoys on Sudan and urged to rally behind the recent truce reached by by the military council and the protesters.

The Somalian authority cut its diplomatic ties with Guinea over Somaliland leader’s invitation to Conakry accusing of violating Somalia’s sovereignty.