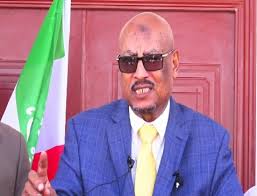 The Chair of Justice & Welfare Party-UCID, Hon. Faisal Ali Warabe has held a press conference on Saturday speaking a number of thorny issues ranging from the visit of Somaliland president to Guinea and the reaction from the Villa Somalia. Mr. Faisal has said that once President Bihi returns to Hargeisa that Somaliland will announce suspending the participation of any talks with Somalia. He claimed that the gov in Villa Somalia was not elected by the people and cannot represent on behalf of Southern Somalia. He reiterated that in order for the talks to bear fruit that Somaliland needs a genuine partner that they can talk to about the serious issue of both states. First of all, UCID chair has sent a cable of congratulations to Guinean officials and its people in regard to the warm and cordial reception that they accorded to Somaliland delegation headed by the incumbent president Musa Bihi Abdi on his official state visit to Conakry. He reiterated that the trip to Guinea and the previous one that UCID chair and SL Interior minister embarked on visit to Kenya would pave the way for Somaliland’s recpaturing its lost statehood. Mr. Faisal has insisted on that there is no central gov in Somalia. He said that it was a huge mistake to say that Somaliland is engaged talks with Somalia. He told that we should not have dialogue with a country that does not exist in paper. Mr. Faisal added that starting from the time the president return home from Guinea that Somaliland gov must issue a new directive indicating that Somaliland will not have talks with Somalia until Somalia will have a functioning gov that represents the people. Mr. Faisal stated in his press conference that Somalia needs to have a democratically elected gov just like that of Somaliland.

He called on that that SL will hold talks with a gov that is capable of protecting its borders and has the right to collect taxes. Somaliland and Somalia used to be two states whilst Somaliland has a well functioning gov but Somalia is still struggling to put its house in order. He clearly revealed that once Somalia has a robust gov that Somaliland will start negotiating with them. Mr. Faisal has said that the talks have been a bit problematic to Somaliland. He said with loud and clear voice that Somaliland must suspend the talks once and for all. He spoke of the current Somalian president and his prime minister that they used to be refugees in Dadaab and are pursuing the policies left behind by the late deceased president Said Bare.